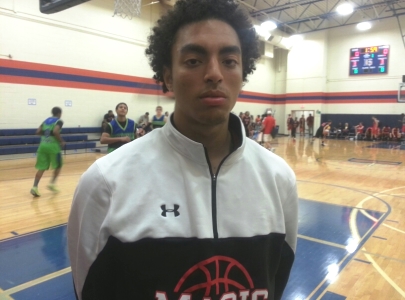 On Saturday afternoon, while many other high school programs were taking the day off, Westwind Prep Academy's high school basketball program was in action against The Orme School.  Westwind Prep would blow out their opponent in fine fashion, 133-53, and would see an historic performance by 6-foot-4, 180-pound senior guard Lyrik Shreiner.  Shreiner would absolutely explode in the road victory for his team - pouring in an amazing 65 points on 26 for 27 shooting in the game!

Shreiner would turn in the best scoring performance in Arizona high school basketball history while playing in the nice Tim's Toyota Center in Prescott, Arizona.

While this is the best scoring outburst from Shreiner in his playing career and would be for any prospect in the state, Shreiner recently scored a game-high 24 points against nationally ranked Findlay Prep (NV) on their home floor earlier this season - a performance that raised many eyebrows of college coaches.  Shreiner also scored a game-high 28 points against Scottsdale Junior College – a big performance for a high school senior against junior college talent.  As a result, Shreiner is now receiving loads of division-I interest, and, after today's performance, Shreiner will now be picking up much more recruiting interest.

No Arizona prospect has helped themselves more this high school season than Shreiner.  After deciding to transfer from Glendale High School for his senior season to Westwind Prep, Shreiner has elevated his game, and, as a result, also elevated his college recruitment as well.

After strong performances this past spring and summer on the AAU/club circuit, Shreiner has played exceptionally well this fall.  Shreiner has soared well below the recruiting radar for sometime, even though he is a nice talent that I have spoken about for the past 2 years.  While possessing excellent athleticism as a player and an excellent overall academic profile, the senior shooting guard prospect is just now coming into his own as a college prospect.

This past spring and summer, Shreiner had a strong performance while playing for his club program – the Arizona Magic Pump N’ Run-2014 team.  Shreiner played well within himself and became a very good teammate on a well-balanced team of Arizona prospects – leading the team to two tournament championships.  Shreiner also came up big this fall in this year’s Arizona Preps Fall Showcase, where he showed very good aggression and a high-level ability to compete.