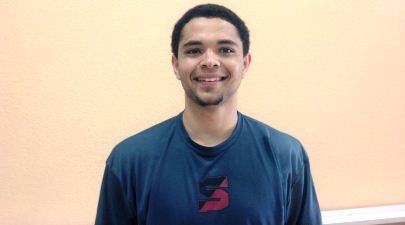 It was a long, long road for Westwind Prep's 6-foot-4, 205-pound senior guard Glenn Baral, but it has finally come to an end as the talented, sharp-shooting guard prospect has found a college home - and just before the beginning to another summer aau/club season.

Baral had planned to play through the summer months in an attempt to boost his college recruitment, but before he would play in his first event next weekend with his club program, the Arizona Magic Elite, Baral decided to end his college recruitment after picking up a scholarship offer from Stetson University - a division-I program that competes in the Atlantic Sun Conference.

Baral received a scholarship offer over the phone from new Stetson head coach Corey Williams on Friday evening, and gave his verbal commitment to attend the program.

"Coach Williams offered me tonight, and I decided to take it," Baral told Arizona Preps.  "It is a great opportunity for me and I really like their program."

A native of Richmond, California, Baral ventured to the state of Arizona this year after spending last season at a prep school program on the East Coast.  As a result, Baral blossomed as a college prospect and was  among the state’s best unsigned prospects this spring.  While playing for Westwind’s National Team this season, Baral was steady with his play and helped lead the team to a championship victory in this year’s Southwest Prep Showcase.

Baral played this spring with the Arizona Magic Elite, a team coached by Kenny Mullins and Gino Crump.

Baral is a nice-sized combo-guard prospect with excellent size for both guard positions, but is at his best from the shooting guard position, as a result of his strong ability to shoot the basketball with unlimited range.  Baral has a nice shooting stroke which he has developed a great deal over the years.  Baral is able to shoot the basketball with precision and with range.  He is also a very good scorer that is capable of making plays effectively off the dribble – possessing a nice mid-range game.  Baral’s size allows him to beat up smaller guards, as he likes to score on the low block and around the paint against smaller opposition.  Baral has solid lateral quickness defensively, and he has an ability to play both guard positions - a nice attribute that he possesses.

"Anthony Ray really helped me in the recruiting process," said Baral.  "I really appreciate him a great deal."

Congratulations to Baral and his family from our staff here at Arizona Preps on this amazing accomplishment for his future.