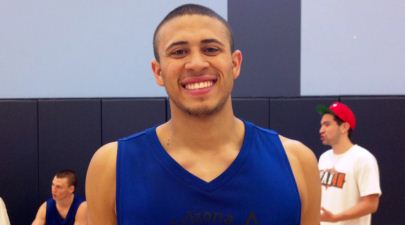 The wait is also now officially over for Westwind Prep and Tucson Amphitheater High School graduate, 6-foot-6, 225-pound prep post Charles Benson.  After receiving numerous scholarship offers this spring to numerous division-II programs around the country, Benson has made his college decision and will further his college playing career at Minnesota-Duluth College in Minnesota - a division-II college program.

"I'm excited to get it all done," Benson told Arizona Preps.  "I felt like this was the best fit for me to play and have success.  Coach (Kevin) Williamson has been recruiting me since my sophomore year of high school, so it made the most sense."

Benson was still in the recruiting hunt late this spring, as he tried to determine for himself whether he wanted to continue his dream of playing division-I basketball, or look for the best opportunity for himself to play at the next level.  In the end, he chose the college program that was the best fit for him.

Benson competed for Westwind Prep's talented post-graduate program this season.  Benson developed a great deal over the past year while playing against local junior college competition at Westwind, and under the leadership and direction of head coach Gabe Stephens.  Benson was consistent for the team all season long and was a Team Captain for the group.  Benson competed at a high level and put up strong individual statistics – helping the Westwind post-grad program to their best season since the school’s origination.

Benson also competed with his club program, the Arizona Magic, the past two spring and summers in an attempt to raise his recruiting stock.  Benson competed this spring with a team of unsigned seniors and post-grads on the Arizona Magic Pump N' Run-2014's and the team was very successful, as each of the young men on the team have now found college homes for themselves.

In high school, Benson had one of the best high school basketball careers in the state of Arizona to date.  Benson helped lead his Amphi varsity program to an 88-9 record over three seasons and three-straight trips to the state championship – winning the state title in 2011.  As a senior, Benson and Amphi lost in the title game to Peoria HS (50-48), after a basket in the final seconds by Peoria.

Benson was a major force for the Amphi basketball program, especially in his senior season where he averaged 12.9 points and 7.6 rebounds per/game, while shooting a very impressive 69% from the field.

Congratulations to Charles Benson on this tremendous accomplishment for him and his family.

Arizona Hoop review Scouting Report:  Benson is a tweener for the power-forward position, but I love his size at 6-6, 225-pounds and his athleticism as well – making him a big mismatch for most opposing post players.  Benson has a very strong athletic build with nice size on his frame.  He has nice length of arms and good bounce off the floor, that allows him to make plays and finish strong around the basket.  Does not mind physical contact, in fact he relishes it, so he gets to the free-throw line quite often as a player.  He is skilled and has really developed his overall ability to shoot the basketball with range, while also putting the basketball on the floor and making plays for himself or others.  He still needs to develop his overall ability to handle the basketball on the perimeter to develop into a small forward in the future, but he has a good overall skill level as a stretch four-man.  An active rebounder and shotblocker for his size, Benson will rebound outside of his area and plays much bigger than his size suggests.  Very good low post defender.  Runs the floor very well and plays hard.  Has a great attitude as a player and is a quality teammate.  A nice sleeper prospect.  Also an excellent student.