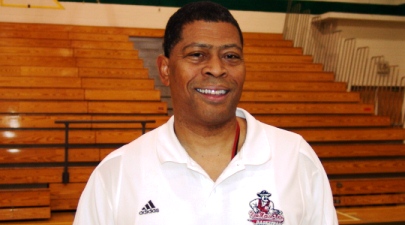 Taking Arizona Basketball to the Next Level

Westwind Preparatory Academy (WPA), a Phoenix, Arizona based charter school, a month ago announced the hiring of Jeff de Laveaga as their new Director of Basketball Operations.  This week, de Laveaga has announced his impressive basketball staff consisting of some great basketball minds, former college and professional players and the valley’s most experienced trainers.

“We’ve had a very busy few weeks since announcing the new direction of the program,” says de Laveaga.  “I’ve received over 500 phones calls from players, parents, coaches and handlers of kids wanting to send their son/players to WPA for all sorts of reasons, but the common theme is no doubt: DEVELOPMENT.  We are 100% committed to developing Arizona talent with basketball skill workouts, speed and quickness workouts and strength workouts  designed to enhance our players to their maximum potential.”

De Laveaga and the WPA administration staff have spent countless hours interviewing coaches and trainers to find the right fit for the new direction the program is attempting to head.

"I am 100% confident the training, coaching and breakdown of the game teaches our players will receive will be something most high school kids never get a chance to experience in a lifetime.  We will film every workout, practice and game, then break down film with our kids to reinforce our teachings.  Our goal is to produce extremely high basketball IQ’s along with superior talent that easily translates to the college level,” continues de Laveaga.

WPA is proud to announce their new basketball development staff:

Mr. de Laveaga brings over 25 years of experience at the professional, college and competitive youth basketball levels. He was named to the All-American team 1989, 1990, 1991 and was awarded Player of the Year honors in 1991 in his college conference while playing for then Division-II California Lutheran University.   He led the Nation in three pointers made 1990 and 1991 and currently holds six (6) individual school scoring records. After leading the nation in scoring at 29.8 and 28.7 his final two years in college, He continued his career playing professionally in Australia from 1991 to 1996. His scoring abilities soared to a new level, as he led the Australian league in scoring at 41.5 points per game.  He was named the Continental Basketball Association Most Valuable Player in 1992. He still holds the single game scoring record of 84 points, which featured going 18 for 23 from the three-point line.

In 2003, de Laveaga was inducted into California Lutheran University's Hall of Fame as the first group of inductees the school has ever had.  His youth basketball coaching records is second to none here in Arizona, winner of (9) national championships, (33) state AAU champions, (370) competitive tournaments and over (4,000) wins.  He has coached and assisted in sending numerous top Arizona players onto college (over 200) since 2000.

Mr. Brown has more than 14 years of coaching and playing experience ranging from high school to NCAA Division I.  He was fortunate to receive a scholarship to play at Michigan State University under legendary coach Jud Heathcote and played alongside NBA player and coach Scott Skiles.  Brown finished out his college career at Western Michigan University where he ranks 3rd All Time NCAA Career 3 Point Percentage Shooter at 46.66%, 1,168 career points averaging 15.1 points per game in career, 1987 and 1989 All-Conference/Honorable Mention All-America.

Mr. Crump has over 25 years of basketball coaching, training, and skill development experience. Gino is from the Washington D.C. area and still has tremendous ties to some of the greatest basketball minds in the industry.  His background also includes, organizing all phases of basketball operations for over 1,000 campers, as well as successfully coaching at the high school, AAU and Pro-Am levels.

Crump is recognized as one of the finest defensive minded coaches in the state of Arizona and has worked with many of the top Arizona players year after year in his individual trainings.  Crump also served as player scout, recruiter and trainer for professional basketball teams and has national, as well as international, contacts that are constantly looking to place top talented kids. Crump continues to conduct scouting and developing both collegiate and professional athletes at the International, CBA and NBA levels.

He is well respected for his keen eye and his ability to evaluate talent. He has proven basketball coaching and training techniques that are measurable and effective.

Miss Benson played college ball at Howard University from 2003-2008 and was a four year starter and a two-time ALL MEAC 1st team winner.  She won the MEAC player of the week twice and team captain her last two years at Howard.  Benson won an AAU national championship as well as multiple state champions growing up in Ohio.  She was considered the top recruit coming out of Ohio in 2003 as she received all city and state awards for her efforts.

Benson has been with the Westwind program through the tough transition the past couple of years and is eager to continue their high school dominance throughout the top division within the Arizona Interscholastic Association.

OB brings 18 years of experience of professional basketball training. He started working with 7th and 8th graders in 1993 and since then he has worked with thousands of high school, college, and professional players (including 5 NBA lottery picks). OB has carved out a place in the very competitive world of basketball trainers and has earned the respect of coaches and players across the country.

“OB is simply the best I have seen at drill for skill. His precise training prepares them to survive at the next level.” Tony Morocco Head Coach Seton Hill University

“Padraig O’Brien is one of the top developers of basketball talent in the Valley. His effectiveness with all levels from Pros to Young players is remarkable.” Charlie Turner-Thorne Head Coach ASU Women’s Basketball

“OB is one of the best workout guys I’ve seen. He really is concerned with getting players better and helping their development on and off the court.” Milton Barnes Scout Minnesota Timberwolves

Other professionals in the Westwind Prep Basketball Program

WPA plans on having the following basketball teams:

"The rumors of the Westwind basketball program being in financial trouble are simply not true any longer," says Debra Slagle, Superintendent.  "We had a difficult year after Gary (Trousdale) left with a number of our paying post grads, but we survived and the future is bright.  It’s amazing what Jeff has been able to do in just a month on board.  His philosophy surrounding attracting top Arizona talent who understand the importance of academics has been a breath of fresh air and more closely align with Westwind’s past academic performance.  His (de Laveaga) entire basketball program is 100% self-funded through program fees received for the student athletes he has committed thus far to play for him."

WPA is actively seeking investors to start the building of a sports facility on their Phoenix campus.  Preliminary plans have already been approved by the city.  WPA is located in central Phoenix, Arizona, with open enrollment available to any student or family.