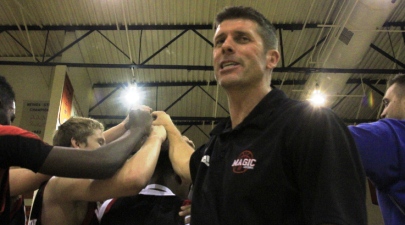 Local Arizona Talent to be Showcased

Westwind Preparatory Academy (WPA), a Phoenix, Arizona based charter school, has announced the hiring of Jeff de Laveaga as their new Director of Basketball Operations. WPA was recently awarded its 20-year charter renewal and has a new focus on academic excellence, which is why the hiring of de Laveaga was essential for the future of the basketball program as a part of the organization.

De Laveaga is well known for developing great basketball programs and talent throughout Arizona for the past decade. His Arizona Gym Rats program, which featured (33) teams ranging from u9 thru u14, was nationally known for winning (29) AAU state and (9) national championships and over (300) competitive tournament at all levels from 2002-2009.  For the past three years, de Laveaga has been running the Arizona Magic Basketball high school club program, which has produced over (200) NCAA Division I scholarships, and (4) NBA players since 1998.  De Laveaga's top u17 team last year was ranked as low as number 9 in the nation and produced a 29-game winning streak, featuring (5) straight tournament championships.

WPA has already had great success on the basketball court, winning the 2010/2011 D-III state championship and producing more than twenty NCAA Division-I players over past several years.  WPA has always attracted top east coast talent.  However the new direction of the program will focus on developing top Arizona talent, with only a handful of talent outside of Arizona.

"I'm a big believer in developing Arizona talent and have proven over the last 10-years that the top talent in Arizona can not only compete, but win against the top talent across the nation," says de Laveaga, who played professional basketball in Australia from 1992-1996.  "WPA is committed to becoming the first Arizona institution focused on basketball skill development, as well as academics.  Our student athletes will have development training as part of their curriculum: speed and quickness training, strength training and individual basketball skills training throughout their week will be instilled."

Debra Slagle, superintendent of WPA adds, "the director of basketball is responsible for developing the SYSTEM in which all WPA teams will adopt, select, mentor and develop the new coaching staffs for all levels and inspire our student athletes to reach their maximum potential. Jeff has the passion and desire we were looking for to take the program in its new direction. We are very excited to have someone at the head of the basketball program who understands the significance of the academic piece and who cares so much about helping Arizona kids reach their goal of playing college basketball."

WPA plans on having the following basketball teams:

"We have started communicating with prospective post grad players who have expressed interest and want to enroll as student athletes for next year," says Matt Allen, WPA Principal.  "We have made significant changes to our administration and teaching staff over the past 6 months.  Our focus is continuous improvement at all levels of our academic program, from our International Baccalaureate Diploma Program to our program for special education and ESL students, so that we create learners today and leaders tomorrow, whether a student is an athlete, an artist or whatever they choose to be."

WPA is actively seeking investors to start the building of a sports facility on their Phoenix campus.  WPA is located in central Phoenix, Arizona, with open enrollment available to any student or family.