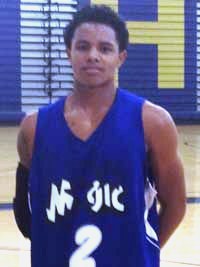 Westview High School had one of the state's most talented teams this season and it showed as they posted a strong 23-7 overall record throughout the 2011-2012 boy's high school basketball season.  Among the top teams in the state's tough Division-I Class this season, the Knights would eventually fall in the second round of the state playoffs after a 73-64 loss to Brophy Prep.

A major reason for the team's success this season was the strong and consistent play of 6-foot-1, 155-pound senior guard Kevin Davis.  A talented combo-guard prospect for the Knights this season and head coach Francisco Villa, Davis led his team by turning in his best season of his high school career.

Davis averaged a team-high 14.7 points per/game, while also turning in 2.9 rebounds, 3 assists and 1.7 steals per/game.  As a reuslt of Davis' strong play this season, he earned Most Valuable Player honors for his team.

Davis did not slow down a bit either, as he carried over his strong play from the season to the spring evaluation period.  Davis benefited a great deal from his play on the spring circuit, as he proved that he is a quality floor general and a pure-point guard prospect capable of scoring effectively off the dribble and from the perimeter.

Davis, while being coached by Arizona coaching guru Hoseah Graham (Westwood HS head coach) and Desert Vista HS assistant coach Paul Hardiman, led his Arizona Magic Seniors to two tournament wins this spring, and, in the process, developed as a player and proved that he is worthy of serious recruiting attention.

While it is now late in the recruiting process, college programs still looking for talented players to fill their rosters for next season are beginning to take a hard look at Davis.

Davis advised me that he is currently hearing from numerous division-II programs, such as Nebraska-Kearney and Colorado State-Pueblo, and is also hearing from numerous junior college programs.  Davis advised me that he may also consider attending prep school next season at Westwind Prep, but is waiting to see what happens in his college recruitment before making a decision.

Davis had as good a spring performance as any other unsigned senior prospect in the state, and really helped himself a great deal with his play this off-season.

I caught my first glimpse of Davis last fall (2011) at the Arizona Preps Fall Showcase, and was very impressed with his ability to score the basketball.  He improved as a player nicely throughout his senior season, as he learned to transition his game to the point guard position and make players around him better - looking very comfortable in the driver's seat.

Arizona Preps will continue to follow Davis and his college recruitment the remainder of this spring and into the summer - bringing you any updates as they continue to develop.

Arizona Hoop Review Scouting Report:  Davis is a nice combo-guard prospect that has been able to make a nice transition into being a pure-point guard prospect.  A left-hander, Davis is a strong penetrator and finisher at the basket and is capable of getting into the lane and creating plays for others off the dribble.  He is also a good shooter and has some range, but still needs to continue to add more range to his shot to reach his full potential offensively.  He has very good quickness with the basketball and pushes the basketball up the floor to the open man.  Has good court vision and likes to make the pass.  Has very good lateral quickness defensively and is a very good on-the-ball defender.  Capable of becoming a lock-down defender with more focus in this area.  Has some upside as a player.  Great attitude on and off the floor with a nice smile and has very good body language.  A good sleeper prospect.