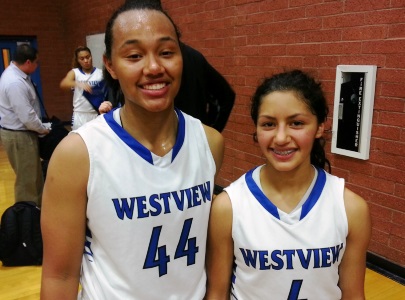 Westview High School was flat out amazing last season, as they posted a superb 33-2 overall record.  Westview might have won it all last season, had they not run into two of the state's top teams.  They would fall to an unstoppable St. Mary's team on their home floor in the sectional finals, and then lose to a tough Hamilton team in the quarterfinals.

This season, head coach Lisa Contreras, one of the top coaches in the state, returns a very experienced lineup from last season that only lost two seniors from last year's team to graduation.   While the team surprisingly has lost two games this high school season, losing two games in a row to Highland and Mesquite, Westview (7-2) is now back on the winning track - winning their last 3 games in a row.  On Wednesday evening, they would win in fine fashion - blowing out a talented Valley Vista HS (6-4) team on their home floor, 68-33.

Westview is again led by the superb point guard play of 5-foot-3 senior point guard Renee Contreras and the strong inside, outside play of 5-foot-10 junior forward Saylair Grandon.  Combined with a nice overall team attack which includes serious ball movement, defensive pressure, and patience in an up-tempo style of play, this year's Westview team is looking to go all the way this high school season.

Westview would prove just how good they can be on Wednesday evening.  After leading Valley Vista by a narrow margin after the first period, 15-12, Westview would outscore their opponent 28 to 8 in the second period to blow the game wide open.

After a full-court layup by terrific 6-foot-2 freshman post Kiara Edwards to keep the game within reach for Valley Vista early in the second period, Westview would go on a huge run finish out the half.

Westview would then outscore Valley Vista 25 to 13 in the second half to win the ball game, 68-33.

Westview will now move on to face Camelback HS on Thursday on the road, then face their toughest test of the season when they take on #1 ranked Dobson High School (8-0) on Friday, on the road as well.

This Westview ball club is as good as any team in the state, and are very enjoyable to watch.  Watch out for this team this season, as they look to fast-break their way to a potential Division-I state title.