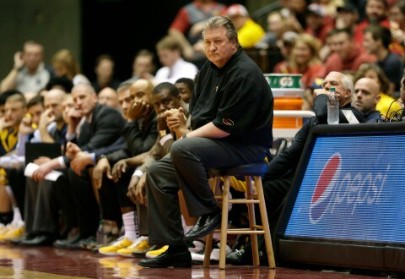 We recently wrote about the level of talent of Bella Vista Prep's 6-foot-8 senior wing Jamel King, and him now being available in his college recruitment. Well, King wasn't available long, as this week, in very exciting fashion, King received an offer and gave a verbal commitment to one of the strongest basketball programs in the country. King became the last commitment for the University of West Virginia and their 2021 recruiting class.

King was offered a scholarship by the previous University of New Mexico staff, and he gave a verbal commitment, but when new head coach Richard Pitino took over the Lobos' basketball program, some things changed. Pitino and his staff alerted King that they currently did not have enough college basketball scholarships available to take him this fall. As a result, King went back on the recruiting board, and looked for a new college home for himself. He didn't have to look for long, as he would land a huge scholarship offer from West Virginia quickly in the process.

Bella Vista Prep Director of Operations and Head Coach Gino Crump, who recently took over the Bella Vista Prep program, was very instrumental in the recruiting process for King. He advised me that he feels like King has loads of potential and upside for the future, and could become a pro over time with hard work.

"Bob (Huggins - pictured, photo courtesy of the Washington Post) will get him right," said Crump. "I have been talking to him (King) about his hustle."

King is a native of Tuscaloosa, Alabama, and has been highly touted as a college basketball prospect for many years now. He was once considered as a high-major Division-I prospect, but after many struggles this past season by the Bella Vista Prep basketball program, which had (3) different coaches this past season, and the COVID-19 pandemic, King saw a serious drop in his college recruitment, until he landed at New Mexico, but the changing of staffs at New Mexico put him into an interesting position, until he now landed at West Virginia.

King is a superb talent at 6-foot-8 in height, as he is very long and athletic and can make shots with extended range. He has excellent size and length for the wing position and is completely battle-tested - competing against the nation's best talent throughout his high school career. He has a good shooting stroke, which can stretch the defense. He can also put the basketball on the deck and get to the basket and finish strong at the rim, or pull up from mid-range. He is a solid slasher and finisher in traffic, and is fairly good in the open floor. He has a long, rangy frame that allows him to finish high and well above the rim, when needed. He is a solid rebounder, although I would really like to see him focus much more in this area of his game to maximize his potential as a player. A solid defender that is capable of playing passing lanes quite well and defending on the perimeter or around the basket.

I also spoke with West Virginia assistant coach Erik Martin this weekend about King, and it looks as though this young man will look to have an excellent opportunity at the Big-12 program, with continued hard work.

Congratulations to Jamel King and his family on this tremendous accomplishment from our Arizona Preps' staff, and also Gino Crump and his Bella Vista Prep program, on helping to change this young man's life. Major opportunity is now in this young man's hands, as he has an opportunity for a very bright future, after a difficult senior season.