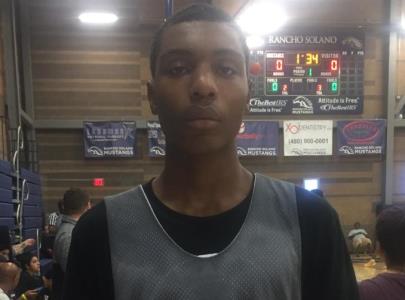 A very active guard who is all over the place.  He is a dominate presence on both offense and defense.  Both played very well at the Ryan Silver event showcasing his ability to be an elite scorer with the ability to hit his open jump shots. Also, being able to create his own jump shot using his length for separation.  Both, also showed his ability to attack the rim under control - finishing in a variety of different ways - using the floater, euro reverse layups or a dunk.  He is also a good ball handler and showed he can be the point guard in the court using the pick and roll and finding the open player. Defensively, he can change people's shots because of his athletic ability.  He is able to slide laterally well with active hands.  Definitely a high level player that will be a great impact.  He can almost do everything on the court.  If I had to compare him to anyone it will be one of the guys I train, NBA SG/SF, Justin Holiday of the Chicago Bulls.  Exact, same body-type, shoots like him and defends just like, Justin.

A strong guard who's a bulldog on the court. This kids plays so tough and don't let his height determine anything.  He's built like a running back.  Has very good court vision.  He gets everyone involved on the court.  He literally makes his team better by finding people almost every play.  He is really good off the pick and roll. He comes off with a good hesitation and can get to the rim to finish, stop and pop or create even more to find the open player. A high IQ player that sees everything on defense, just as mush as offense. A good defender and beats people to their spots.  He has quick feet and hands.  People may not give him the respect he deserves, but he is a really good player.  Definitely a floor general and leads the team very well.  In my opinion, he's for sure one of the top point guards in the state.  He just sees the play two steps ahead of any player that I've seen so far in Arizona.  Please don't let this kids height fool anyone.

A long, athletic guard who played really well at the Ryan Silver event. He is a athletic, skilled wing who can put the ball on the floor, get to the rim and hit his open shot.  He showed that he is poised and will pick his spots without forcing.  He uses his shot fake from the perimeter, one dribble and finish at the rim.  Runs the floor very well on transition and can finish strong at the rim. Really good hesitation and utilizes it really well in traffic or in a one-on-one situation.  Really good at playing the passing lanes.  He had about 4 steals that turned into transition points.  He can guard the wing and post position. He has upside to continue to get better.

A shifty point guard who looks to get his team involved.  He has good court vision and plays under control.  Ricardo showed his ability to be able to play with other good players and still get them highly involved, while being a standout.  He is really good at his change of speed with body control.  Showed an ability to create as well as hitting his open shots.  A very good ball handler.  Tough for players to stay in front on him.  Defensively he held his own, but may struggle a little against guards who are more athletic.  His basketball IQ, combined with his ball handling makes him a good point guard.