Werner Takes Over In First Round Of State Playoffs 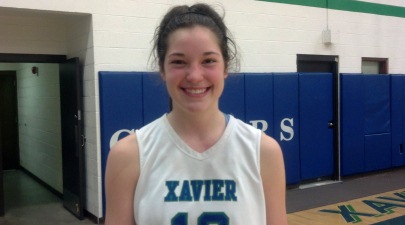 Xavier College Prep 6-foot-1 senior guard/forward Katie Werner has been selected as our 2013 Arizona Preps Girls Player of the Year. Werner turned in a dominant senior season - leading a young Gators' team to the second round of the state playoffs. Werner is headed to play for Yale University next fall.
Share
Facebook Twitter LinkedIn WhatsApp Pinterest Email

Xavier High School's 6-foot-1 senior guard/forward Katie Werner (Yale commit) has had an excellent senior season and she is not ready for it to end just yet.  After a superb senior year where she has led her high school team in almost every statistical category, Werner led her team into Wednesday evening's first round match-up with Boulder Creek HS (18-11) in this year's Division-I state playoffs.

Werner, currently rated as our #1 overall prospect in Arizona's 2013 senior class, is a very skilled and gifted talent that is able to play several positions on the floor, and is a fundamentally sound performer that is able to take over games on both ends of the floor.  Werner is a strong ball handler and passer, that is capable of even playing the point position for her team.  She also rebounds the basketball very well and is able to score around the paint or from the perimeter.

Werner can be almost unstoppable at times and on Wednesday evening's first-round match-up, she was.  Werner did it all and it was very fun to watch her performance.

Xavier (21-9) would get down quickly in the game to Boulder Creek, 5-1, after 4 minutes into the game.  Werner would finally score her first field goal of the game with 2:52 remaining in the first period.  Werner would then come right back a minute later with a spin move in the paint, finishing with her left hand to make the score 6-5, Boulder Creek.

Boulder Creek would take the lead back, 12-11, with 4:45 left to play in the first half, after a driving layup from 5-foot-8 junior guard Hannah Nielsen.  The lead would not be for long though, as Werner would convert a step-back mid-range jumper, and then come right back with another spin move in the lane after being fouled.  Werner would make the free-throw for the three-point play - putting Xavier ahead 16-14.

After a left-handed layup in transition by Werner, on an assist from 5-foot-10 junior forward Mckenna Renfro, Xavier would take an 18-14 lead into the half.

In the second half, Werner would continue her exceptional play - scoring a left-handed layup in the paint to push Xavier ahead 20-14.  Later in the period, Werner would drive the baseline and kick the basketball out to the wing for a three-pointer from teammate, 5-foot-9 senior forward Ashley Orozco.

After a layup in transition from Werner, and then a driving layup around a defender by Werner, Xavier would take a nice 30-17 lead with :18 seconds left to play in the third quarter.

Immediately following Werner's basket, Xavier 5-foot-6 sophomore guard Alexis Carbine would steal the inbounds pass and convert a layup with :11 seconds to play in the period.  After a basket by Boulder Creek before the third quarter buzzer, Xavbier would hold on to a 32-19 advantage after three quarters.

In the fourth period, Werner would quickly continue her strong play with an offensive rebound and putback to make the score 34-19, Xavier.

Werner would go to the bench with 4 fouls and with 7 minutes left to play in the game.

Boulder Creek would fight hard in the late stages of the game to get back into contention.  After two free-throws from 6-foot-3 senior post Sam Young, Boulder Creek would steal the basketball at halfcourt and go back inside to Young for a nice basket inside the paint - making the score 42-31, Xavier.

After a timeout by Xavier, Werner would come back into the game, but would earn her fifth foul with :58 seconds left to play - fouling out of the game.  While Werner would foul out, the damage had already been done by the talented senior.  Xavier would cruise to a 47-35 first round state playoff win.

Xavier will now face top-ranked #4 seed Westview HS (32-1) in the second round of these state playoffs on Friday evening.

"Tonight was all about the team," said a very confident Werner after the game.