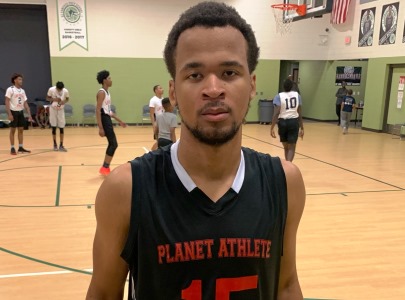 It has been a long road for Planet Athlete's talented 6-foot-6 senior forward Walter Talley.  After receiving loads of college interest as a mere freshman and being regarded as one of the state's top up-and-coming prospects, some poor decisions and life challenges caused Talley to transfer schools and even consider no longer playing basketball.  After some serious hard work, on and off the court, this young man has now returned to form, and has given himself a future in college basketball.

It has been a long road for Talley, who first started his high school career at Desert Vista High School.  After his freshman season, Talley would be forced to leave the program for disciplinary reasons.  He would then land at Tri-City Christian High School for his sophomore season, and would help lead the program to their third consecutive state title game appearance, only to see the team fall in the finals.  Tri-City Christian would finish the season with a nice 21-2 overall record on the season, with Talley posting very good numbers on the season.

Last season as a junior, Talley would attend Bella Vista Prep in North Scottsdale.  As a junior prospect on a very loaded team, Talley would see a lot of playing time, but was not at his best physically, which caused him to not play his absolute best.  During his junior season, Talley would quickly fall from being touted as a top prospect, to falling into obscurity with college coaches, as other prospects in the class passed him up with work ethic and discipline.

Over the off-season and heading into his senior year, his most important season, Talley would gain weight and lose even more focus - resulting in him playing very subpar basketball in the spring and summer, and only showing mere glimpses of his old self.  In fact, Talley looked much like a different person all together on the basketball court.  As a result, Talley lost the division-I recruiting attention that he once had, and began to flirt with the idea of no longer playing the sport.

As a senior, Talley decided to change programs, once again.  He landed at Planet Athlete where he would play for Head Coach Eric Bowman's program.  Bowman seems to thrive in the face of adversity, and does an excellent job of creating second chances for Arizona's top prospects that need it.  Bowman has spent a lot of time, on and off the court, with Talley this season, and, regardless of what he has or hasn't done, it has worked, as Talley has regained the love for the game once again.  As a result of Talley's newfound approach to his body and the game, Talley has flourished this season - losing serious weight and improving his overall skillset.

Talley has had some big games for Planet Athlete this prep school season.  His best game this season was a 30 point outburst against Findlay Prep (NV) - a performance that made some noise in his  college recruitment.  As a result of Talley's performance this season, he has generated a lot of college interest as of late from numerous smaller school programs and top-rated junior colleges.

Talley is also currently hearing from San Jose State, New Mexico and Eastern Michigan, although neither school has yet to offer him a scholarship.  This spring, as schools scour the country for players, and coaching changes create more scholarship opportunities, Talley could benefit.  It will be very interesting to see what happens for him.

The level of college or the name of the school should not be important for Talley this go-around.  Instead, it will be simply important for him to have an opportunity to go to college.  The best thing about Talley's current position, is that he will be attending someone's college next fall on a scholarship.

Talley was as highly touted a college prospect as you will find as a mere freshman, as he received offers from such programs as Washington State University and Cal-State Northridge.  Both offers no longer exist or are on the table for Talley, but he is now in the process of receiving new offers for himself, and building a new chapter for his life.

It's not where you start, but it is always where you finish in life.  Adversity does a lot to shape us and develop us as human beings.  Walter Talley has learned a lot in his young life - lessons that he has learned and that will travel with him the remainder of his natural life.  The adversity that he has had to overcome in a short period of time will be very beneficial to him as a enters the collegiate ranks.

For a New Yorker, opportunities are hard to come by in a city crowded with people looking for them.  Talley had forgotten that in his youth, and just, flat out, didn't understand it.  After seeing his opportunities dwindle over the past several years, and with his future looking bleak and absent of the sport that he loves and had given so much of his life to, Talley decided to fight.  With his back truly against the wall, Talley fought his way back to a player that has shown resemblances of the former top-rated college prospect that we once regarded as a top recruiting target.  Talley is quicker then ever before, and has an advanced offensive skillset that allows him to play multiple positions on the floor with poise.

While his future is still unfolding a great deal, it is bright again.  But this time, not just in the sport of basketball, but also in life.

I will continue to follow Talley's college recruitment closely this spring, and bring you any updates as they continue to develop.

Arizona Hoop Review Scouting Report:  Talley has excellent size as a wing prospect and also very good versatility with an advanced overall skillset.  Talley is a guard/forward prospect currently that likes to play inside and out.  He is able to score effectively around the paint, and also has a nice ability to step outside and shoot the basketball as well with a good shooting stroke.  He has very good versatility as a player - allowing him to play multiple positions on the floor, although he is at his best currently as a small forward or wing.  As he matures, he should be able to do much more on the perimeter.  Talley has a very good handle of the basketball, so he is capable of playing in the open floor, but his best asset is his physical toughness and ability to rebound and finish around the basket.  He has a very good mid-range game, which allows him to score effectively around the paint and from the perimeter.  Talley is quicker than most power forwards on the perimeter, and he has the size to overpower most smaller players - taking them into the post as needed.  Talley has had to overcome many obstacles in his short life, and has rededicated himself to the game.