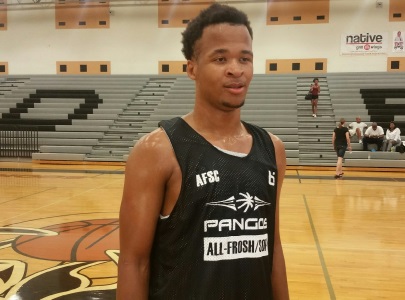 One of the elite young prospects in the state of Arizona is Tri-City Christian High School's talented and skilled 6-foot-7 sophomore guard prospect Walter Talley.  A native of New York where he moved to the state of Arizona just two years ago, Talley is a big time prospect for the future and is coming off a good sophomore performance - helping lead his high school program to another runner-up finish for the CAA state title.

It was the third year in a row that Tri-City Christian would finish as the state runner-up, as the program would fall to a very focused Skyline Prep in the state final.  Tri-City became the new home for Walter Talley just before the beginning to the high school season, as the budding young prospect would leave Desert Vista High School to transfer schools.  Talley would play both guard positions throughout the season for the program, behind the quality leadership of high school head coach Paul Brown.

Tri-City Christian finished with a 21-2 overall record on the season.

Now that the season has come to an end, Talley will now take his game abroad, as he will be playing this spring and summer for top-rated West Coast basketball scout, tournament organizer and coach Dinos Trigonis and his Belmort Shore (CA) club program.  Talley has already began playing for Belmont Shore since the end to the high school season - competing with the program in spring league games and playing strong early.

"Walter Talley is a strong forward that can play as a guard or forward and can score inside, as well as extend defenses with his three-point shot," said Dinos Trigonis in a scouting report.

Walter Talley has many basketball enthusiasts in the West excited about his tremendous potential for the future.

Last summer as a freshman, Talley dominated on the AAU/club circuit throughout the spring and summer, while playing at the 16U level for the Arizona Powerhouse Hoops' program.  While just coming off a freshman season, Talley would play up and the 16U level and perform at a high level against players a year older.  This spring Talley will look to pick up where he left off last summer, although he will be playing at the 17U level with one of the top programs in the country.

For his efforts already, Talley has received scholarship offers from Washington State University and Cal-State Northridge, with many more schools now looking to get involved early.

Over the past year, Talley has worked hard on his approach to the game and has really improved his ability to play the overall game of basketball, adding a better overall pace of play on the offensive end and also migrating to the guard posiiton on the floor - becoming a much bigger guard prospect that can handle the ball in many situations and see the floor.

Talley is a nice looking prospect for the future as a result of his size and offensive skillset, which allows him to play inside and out.  Still possessing two more years of high school basketball, Talley is a potential Top 50 national prospect over time.

Talley is on pace for a big recruiting frenzy this spring and summer, as college programs begin to position themselves to land the talented young prospect this club season.  Talley is a Solomon Hill (NBA player) type,that can shoot the basketball with range and also make plays off the dribble, get to the basket, post, rebound and has excellent toughness and size.  He is as versatile a prospect as there is in the state- regardless of class.

Talley will need to gain consistency on his longer perimeter jump shot and also get more explosive atheltically to reach his full potential as a college prospect.

Talley should only continue to receive many more scholarship offers over time, so it will be fun to watch him develop throughout the club season and also compete over the next two years.

I will continue to follow his progress and recruitment as a player closely this club season, and bring you any updates as they continue to develop.

Arizona Hoop Review Scouting Report:  Talley is not your typical younger prospect.  He has excellent size that you normally do not see in a prospect his age.  While Talley is a little older for his class, it will suit him nicely over time as he grows older.  Talley already possesses good physical strength on his frame and also excellent overall physical size.  He has the potential to really develop over the years into something special, since he also has a very good offensive skillset that he picked up on the East Coast as a youngster.  Talley is a guard/forward prospect currently that likes to play inside and out.  He is able to score effectively around the paint, and also has a nice ability to step outside and shoot the basketball as well with a good shooting stroke.  He has very good versatility as a player - allowing him to play multiple positions on the floor, although he is at his best currently as a small forward or wing.  As he matures, he should be able to do much more on the perimeter.  Talley has a very good handle of the basketball, so he is capable of playing in the open floor, but his best asset is his physical toughness and ability to rebound and finish around the basket.  He has a very good mid-range game, which allows him to score effectively around the paint and from the perimeter.  Talley is quicker than most power forwards on the perimeter, and he has the size to overpower most smaller players - taking them into the post as needed.  Talley has quickly become one of the elite underclassman prospects in the state, and looks to have a very bright future ahead of him.