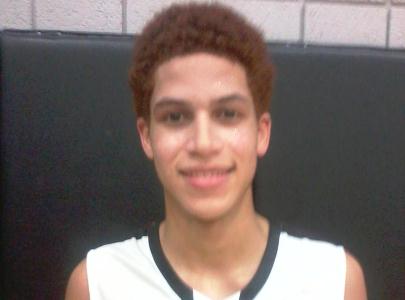 On February 6th I was at Desert Ridge High School for a sectional match-up of Division-I, Section-II - the #3 seed Hamilton Huskies (21-6) versus the #6 seed Cienega Bobcats (20-7).  Both teams had good records but played much different schedules to get here.The game started and 6-foot-7 sophomore center James Sosinksi scored two points down low for a 2 to 0 early lead.  Then 6-foot-4 sophomore wing Terrence Johnson drove by his man and got fouled - making 1 of 2 free-throws for a 2 to 1 lead for Hamilton.

Cienega 6-foot-4 senior forward Xavier Burnham got into the act and scored 2 points from a real nice assist by 5-foot-9 junior PG Shane Burton, and then Johnson made an acrobatic alley-oop lay-up followed by 6-foot-2 junior forward Dylan Mccall's lay-up.

Hamilton 5-foot-10 junior guard Ben Thompson hit a mid-range shot, and then Burnham again for two points to tie it at 9 all.

Hamilton's Walker would score 5-straight points to close out the quarter for a 15 to 9 lead for Hamilton.

The second period started and Cienega 6-foot-3 sophomore wing Daren Biggs hit a shot off the glass to narrow the margin for Hamilton, but Hamilton would go on a quick 6 to 3 run for a 21-14 lead for Hamilton with 4 minutes left in half.  Johnson then made a deep 3 followed by Dylan McCall for 2 for a 23 to 17 lead.

Terrence Johnson had 12 points and Nate Walker had 8 points at the half for their respective teams.

The 3rd quarter started and Thompson hit a jumper for the 1st lead for the Cienega Bobcats for a 27 to 25 game.

Hamilton's Sosinski got fouled down low and made one free-throw and then followed that up with a dunk for a 28 to 27 lead.

On the next play, Johnson laid it up high on the rim for a 29 to 28 lead for Cienega, but then Hamilton scored 3 points quickly for a 31 to 29 Hamilton lead again.

Ben Thompson then hit two deep 3-pointers for a 37 to 33 lead for Cienega with 3 minutes left in this see-saw affair.

Whenever Hamilton was in trouble in this game, they would go down low to their big man James Sosinski.  After two free-throws from Sosinski, Walker would convert a driving left-hand lay-up to tie it up at 37 all.

Johnson then made an incredible block at the basket of a shot attempt by Brandon McCall to keep it tied at 37 all.

The end of regulation went back-and–forth with a 47 all tie and with both teams having chances to win it.  Missed free throws and jumpers by both teams caused four extra minutes of play.

Overtime started and it was slow going for both teams, until Biggs scored a tough basket to take a 49 to 47 lead for Cienega with 30 seconds left.  Then Hamilton's Walker made a slashing lay-up to tie it up with 10 seconds left, but Shane Burton made an “and-1” for a 52 to 49 lead with :04 seconds left.

Hamilton got it to half-court and they called timeout with :02 seconds left in OT.  The coach set up a beautiful in-bounds play for Nate Walker to be wide open in the corner, and he hit a 3-pointer at the buzzer to send the game into a second overtime.

The second OT started and 6-foot-1 senior guard Michael Garica made one free-throw for a 53 to 52 lead.  Biggs hit another “and-1” for a 55 to 53 lead for Cienega.  Then Hamilton's Sosinski went to the line and made both to tie it at 55.

Hamilton then scored 6-straight points, as the Bobcats had no legs whatsoever, with their short rotation versus the deep Hamilton rotation - wearing them down to win 61 to 55 in one of the better games of the year.

Hamilton was led by Sosinski and Walker.  Sosinski had 16 points, 7 rebounds, 3 assists and 2 blocks.  Nate Walker had 19 points in the game, including the clutch 3-pointer at the buzzer to send the game into 2 OT's.

Cienega's Terrence Johnson had 18 points, 7 rebounds, 1 steal and 2 blocks with an all-around performance for the young sophomore in the tough loss. Daren Biggs also contributed with 17 points in the loss.  The future looks bright for Cienega with these two sophomores.