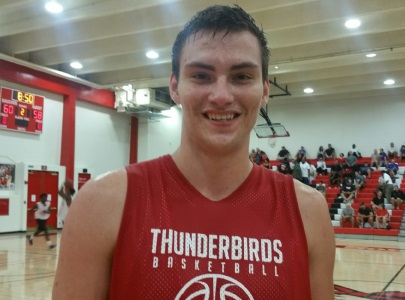 Former Deer Valley High School 2015 graduate, Mesa Junior College 6-foot-10, 245-pound sophomore post Edward Hardt developed as much as any player I have seen in sometime.  Under the development of Mesa JC long-time terrific head coach Sam Ballard, Hardt made dramatic improvement as a college prospect over the past two years for the Thunderbirds.

This season, Hardt is projected as my top post prospect in the conference, alongside Arizona Western JC's 6-foot-11 sophomore post Isaac Allen.  Much different than Allen, Hardt is a wide-body post player with broad shoulders, excellent physical girth and a strong motor on both ends of the floor.  An excellent rebounder and physical post player, I had seen Hardt receiving high-major division-I attention over time, if he had waited until the spring signing period.  But Hardt found his fit early and has decided to pull the trigger with a school in the WAC Conference.

This weekend, after considering waiting late, the choice was simple for Hardt, who flew well below the recruitng radar in high school.  After receiving a scholarship offer early from terrific head coach Cameron Dollar and his assistant coach Lance Lavetter from Seattle University, Hardt gave a verbal pledge to Seattle - giving the program what they strongly desired for the 2017 class, a true post player.

Dollar is one of the top rising coaches in America, as he enters his eigth season at the helm for the program, while Lavetter has quickly become one of the top recruiters of the state and one of the better recruiters in the West.  Lavetter was instrumental in the recruitment of Hardt, and has very strong historical family ties to the state.

Hardt will be a 20 point, 10 rebound performer this junior college season for a very talented Mesa JC team that will compete once again for a Division-I junior college title.  Hardt will be instrumental in the program's success this season, as he should be as good a rebounder as there is in the conference.  Hardt is a true post player - one that uses his big body to his advantage and competes hard on both ends of the floor.  He gets very good inside position and is a space-eater - an asset to any team.

Congratulations to Hardt on his decision from our staff here at Arizona Preps, and good luck to him this junior college season.  Hardt will sign with Seattle University this week.