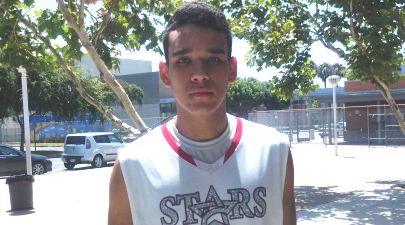 Mountain View had looked very good and awful all at the same time in this tournament, from half to half.  You are not really sure what to expect from their guards, which has led to the inconsistency from their team.  One thing you know for sure is that 6-foot-10 junior PF/C Payton Dastrup will play well every single game.

That was the case in this game, as Dastrup was extremely efficient from the field and was a willing passer to his teammates when Lexington doubled-teamed him.  In this match-up, his teammates played well and almost seemed to outclass Lexington from start to finish.

Mountain View grabbed an early 12 to 2 lead and never looked back.  The score was 32 to 24 at the half for Mountain View. Dastrup and 6-foot-2 junior guard Colten Meo had 9 points each.  6-foot-4 senior Brian Butler had 7 points.

The second half started and, once again, Mtn View looked to have a little more talent then Lexington.  Dastrup, Meo and Butler each played well once again.  Dastrup cleaned up every missed shot - not allowing for any second-chance points for Lexington.  Mtn View played a true efficient game from the field with very few turnovers.  They were up by at least 7 points through the game, even going up by as many as 15 points at one time.

Mtn View won the game 62 to 53 and got to rest some starters near the end of the game.  Mtn View shot 63% from the field and hit (7) three-pointers as a team in a low possession game.  Mtn View was led by Butler with 18 points, Meo with 16 points and Dastrup with 16 points, 10 rebounds, 4 assists and 2 blocks.  Dastrup was also 6 for 7 from the field.

Lexington was led by 6-foot-4 junior forward Nelson Spence with 13 points, who was the only player in double-figures for his team in the loss.  This tournament turned out to be a blessing for the home team who came in struggling and finished with a 3-1 record for the event.

The second to last game of the event was a 3rd place game for Pinnacle and Churchill, which was televised by Cox 7 Sports. Churchill had the fastest team at the event and Pinnacle boasted two division-I studs on their team.

The game started very fast, as anticipated, for an early 15 to 11 lead for Pinnacle.  6-foot-5 junior guard Dorian Pickens looked special in the early going, as he carried his team early with 9 points, 3 rebounds, 2 assists, 1 steal and 1 block.

Churchill got back in the game - cutting it to a 24 to 23 Pinnacle lead with 7 minutes left in the first half.  Then an amazing shooting display from Pinnacle, as they would take a commanding 45 to 32 lead.  That run was led by 6-foot-5 senior PF Lee Andari and 6-foot junior guard Trey Ingram who had 14 points between them.

Pickens finished with 12 points in the first half for Pinnacle.  Pinnacle had a very balanced attack and moved the ball real well, which made them more dangerous than just having one player holding the ball too long, looking to find an open shooter.

The second half started with shots going up at will.  It seemed to be a 10 second shot clock, as the shots went up very fast. Pickens, Andari and Ingram played really well together - giving Pinnacle a 68 to 58 lead with 7 minutes to go in the game.

As a result of the inefficient play for Churchill, and Pinnacle and Pickens playing very well in the second half, the lead would move to 83 to 73 with 3 minutes left to play.  From there, Pinnacle would hold off Churchill with some keep away basketball, and then making their free-throws at the end of the game for a 90 to 79 win.

5-foot-6 senior PG Emanual Morgan had a game-high 27 points for Churchill in the loss.

The final game of the great VMBC event saw Corona del Sol and Pacific Hills (PH) battling it out in the finals for the championship of the event.  Corona has the best guard in the state, in my opinion, with 6-foot-3 junior PG Casey Benson, while Pacific Hills has three different division-I star players on their team.  There were as many as 7 different college coaches in the stands watching these four outstanding prospects.

Corona would strike the first blow with Benson putting on a show.  Benson would go 4 for 4 with 10 points to take an early 18 to 13 lead in the game for Corona.  While 6-foot PG Jahmel Taylor would pace PH with 8 of his own points, Benson would have one of those special halves of play that make you wonder whether you are watching a future college star.  He uses his high basketball IQ, efficiency on the court and alos keeps his dribble alive at all times.  Benson is constantly putting pressure on the defense - setting up plays for his teammates the entire game.  Benson is a college-ready prospect and he’s only a junior.

Corona would take a 38 to 28 lead at the half.  Seven different players scored for Corona with Benson assisting to at least 5 of the players.  Benson had 14 points and 5 assists at the half, with an efficient 6 for 7 from the field.

Jahmel Taylor had a team-high 13 points for Pacific Hills at the half.

As happy as Corona was with a 10-point lead, you can’t get too comfortable with three different division-I players on the other team.

The second half began with PH going on a 13 to 4 run, led by the play of 6-foot-3 senior SG Marcus Jackson (Rice University signee), who has been one of my personal favorite players at the event from out of town.  Then score would now read 42 to 41 for Corona with 7 minutes left to play.

Back-and-forth play for the next 2 minutes of action would make a tie game at 49 all with 5 minutes left to go.  PH would go on a 12-0 run and take a 61 to 49 lead late, as Corona would look to be wearing down.

Corona would go stone cold from the field.  Benson tried to rally his team and set up his teammates for easy shots, but to no avail, as the PH “big 3” were just too good down the stretch.  Even though Benson did make a few plays, they came up a bit short.  PH would win the VMBC with a 63 to 58 win over Corona, giving them the tournament championship.

Jahmel Taylor scored a game-high 27 points for PH, while Marcus Jackson scored 21 points in the victory.

Benson had 19 points and 6 assists in the loss and looked like this year’s Arizona Most Valuable Player for the first half of the season.  Casey Benson was named the Tournament's MVP for his play in the event.  Corona's 6-foot-4 sophomore PF Cassius Peat, Pinnacle's 6-foot-5 junior SG Dorian Pickens and Mountain View's 6-foot-10 junior PF Payton Dastrup were also named to the All-Tournament Team.