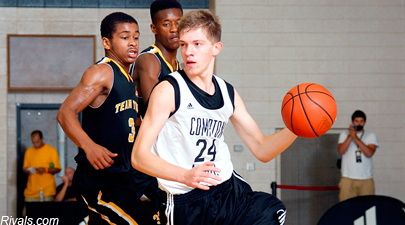 The final day of the VisitMesa.com Basketball Challenge had Red Mountain versus WCI from Canada.  The game started with a very slow-paced game and a defensive struggle.  No one player on either team could find their groove with their shot.

It was a very competitive game though, as it was going back and forth.  That is until Red Mountain's 5-foot-9 freshman Desi Ethridge came off the bench and scored 6-straight points with his aggressive play of taking the ball to hole.  Ethridge would get three buckets in a row to give Red Mountain a 32 to 27 halftime lead.  He would also have one assist to 5-foot-11 senior SG Derek Rojas, who would hit a 3-ball all the way from Canada.

Rojas had 7 points at the half.  Red Mountain also won the battle of the boards, led by 6-foot-7 senior PF Sean Cahill who grabbed a team-high 6 rebounds.

The second half of play started and Red Mountain moved 6-foot-4  senior guard Travis Meeker (Northern Arizona signee) over to the PG position to make plays for himself and his teammates.

WCI 6-foot-6 senior forward Dani Elgadi finished with only 10 points and 11 rebounds, while he usually gets more offensive rebound/lay-up opportunities.

Red Mountain struggled the first 2 days of the tournament, but found their stride the next two days.  Hopefully it will be a building block for them in 2013.

The game started as the role players from St. Johns would hit every shot they would take - taking the pressure off of Marc Loving.  Loving had 16 points in the half out of the 48 total points for his team.

Loving has excellent body control for a big and can finish baskets in the paint with his strength.  He also has a feathery touch out to the 3-point line - making him a tough match-up for anyone to guard him.

Richardson would lead Dobson HS with 9 points in the first half.

Dobson could of easily mailed in this game, since they were down by 20 points, but the “big-3” were not done.  Hopkins unfortunately picked up his fourth foul, while trying to guard Loving, and had to sit - so the other “big 2 “ had to step up.

Dobson started moving the ball a little better and tried finding the “hot man.”  That man became 6-foot-5 junior guard Kodi Justice (Arizona State commit).  Justice would hit (4) 3-pointers in a row to close the gap some.  Richardson also started to score some points of his own, and then Dobson was only down 7 points - 69 to 62 with 3 minutes left.

Hopkins checked in with 3 minutes to go and immediately went to work in the paint.  He scored two shots in a row and then a steal and dunk with 1:20 left in the game - cutting it to a two-point game and a 76 to 74 St. John's lead.  St. John's then lossed the ball late in the game and Ryan Richardson scored a lay-up to tie it up at 76 all for an overtime affair.

In overtime, St. John's hit a 3-ball, followed up by Kodi Justice’s fifth 3-point shot of the game to tie it up again.  Then St Johns hit another three-pointer to take the lead, but Justice would hit his sixth 3-pointer of the game and he was officially unconscious.  It didn't seem like he would miss another shot ever again, which was great for him since he has struggled since he has come back from his injury.  Hopefully this game will catapult him the rest of the season to do well.

Dobson’s 6-foot-2 junior SG Kairee Williams would steal the ball and give an assist to Brian Nichols.  Two more free-throws by Ryan Richardson, and then a basket by Loving, had Dobson up 86 to 84 with 7 seconds left.

St Johns would foul Hopkins, who would hit 1 of 2 free-throws to put Dobson ahead by 3 points with 5 seconds left to play.  A desperation 3 at the buzzer by Loving would fall short for an 87 to 84 victory for Dobson.

This game was the best game of the entire tournament.

Dobson’s “big 3” had 68 of their 87 points, led by Ryan Richardson who had a game-high 33 points in the win.  Kodi Justice had 22 points (6 three-pointers) and Jaron Hopkins also had 13 points.  Justice also had a season-high 11 assists and 3 steals in the win.

Marc Loving finished the game with a team-high 20 points for St Johns in the loss.