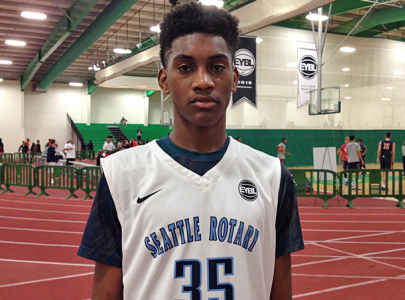 Day two of the annual Visit Mesa.com Basketball Challenge took place at Mesa Mountain View High School.  Many of the top in-state, as well as out of state teams from California, Washington, Utah, Nevada, Pennsylvania, and Illinois are competing in this years’ event.  Every game was very intense, and many of them where decided within the last few minutes.  This is always one of the premier holiday events in Arizona.

Of the games I saw on the day, here are my top performers from the day . . .

While he needs to improve his shooting from the 3-point line, his mid-range game looks very improved from the last time I saw him. Lee’s best asset of his game is how athletic he is for his size, and how he uses his athleticism to do many different things on both sides of the court.  Lee has concreted himself as one of the elite players in the state of Arizona, and I look for nothing but good things out of him for the rest of the season.

While Barcello did not have his best game, he did whatever it took to help his Aztecs' team, and is arguably the best player in the state - regardless of class.  He has a lighting-quick release on his jumper, as well as solid lift from anywhere from the 3-point line and in.  Barcello is also a very heady driver of the basketball from 15-feet and in, and uses a wide variety of shifty splits and crossovers to get around his defenders, and score the ball or draw the foul.

Barcello was also a very active defender all game long, regardless of how his offensive game was going at the time.  One of the most intriguing aspects of Barcello’s game is his never-fleeting confidence, and his ability to score the basketball and lead his team in any situation possible - regardless of the outcome.  Barcello is one of the most highly recruited players on the West Coast in the 2017 class, and currently holds offers from a majority of the Pac-12 Conference, Virginia, Saint Mary's, and many others.  He will play his final year of aau/club basketball with the Oakland Soldiers next spring and summer.

Jalen McDaniels (pictured) was the most dominant player on the court in the night-cap game vs. Corona Del Sol, and helped his team squeak out a win in the last few minutes.  McDaniels is a long, wiery post who has a very similar frame to that of current Duke freshman Brandon Ingram.  He was able to score easily over the smaller Corona defenders, due to his pure length, as well as his physicality and relentless pursuit of the basketball on the offensive glass.  He also contains very good post moves, and a spin move off of the block that is very hard to contain.

The thing that stood out to me the most about Daniels is how well he ran the floor for someone his size, as he would sometimes outrun guards and finish fast breaks with a big dunk or athletic finish around a defender.  Once he develops a face-up game, he will be a special player for head coach Steve Fisher and his staff, as he has signed his NLOI to play at San Diego State.

Tournament Notes:  Clark High School (NV) out of Las Vegas, Nevada beat Loyola High School (IL) out of Chicago. Clark has 2 freshme in 6-foot-4 Jalen Hill and 6-foot-5 Ian Alexander - both will be forces to be reckoned with in the future. 6-foot James Bridges for Clark HS is a long shooter, and 6-foot-4 Darius Jackson, who holds an offer from San Jose State, is a very physical driver who bullied the Loyola team all game long with his wide shoulders, and ability to take defenders off the dribble with his long strides . . .

Desert Vista has one of the best teams in the state, as they defeated Red Mountain on day two.  They are led by 2016 prospect, 6-foot-1 senior guard Tarik Cool, who holds offers from Portland State, Fresno State and others, and also 6-foot-6 junior wing Caleb Simmons, who holds offers from a variety of WCC and Big Sky schools, and is garnishing interest from other schools in the ACC and Pac-12 Conferences.

Desert Vista also has two future stars in the state of Arizona, in 2018 6-foot-10 sophomore post Steele Bennett and 6-foot-6 freshman SF Walter Talley. Bennett is a skilled big who blocks many shots that come his way around the basket, and runs the floor very well for someone his size.  Talley is very physically advanced and plays well beyond his age, on both sides of the court. He has a similar game to that of current Kansas Jayhawk, Wayne Selden . . .

Gilbert HS 2016 SG 6-foot-6 senior Chris Bowling is one of the best un-signed players in Arizona’s 2016 class.  He has a great knack for scoring the ball from all over the floor.  He also has long arms and defensive awareness, which causes issues for the offensive players he is guarding.  He holds offers from NAU, Sam Houston State, Idaho State, and others as well . . .

Mesa Mountain View had one of the more physically tough players on the day in 6-foot-1 PG Tommy Kuhse. A great floor general and leader for his team, Kuhse had control of the game in all situations, and was tough to keep out of the lane all game long. He was also very consistent shooting the ball from outside the 3-point line as well.  He is getting recruited by many schools at the Division-2 level . . .

One of the more underrated guards in the state is 6-foot senior PG Kyle Vanharen from Perry High School.  A lightning quick guard, Vanharen has a great change of speed off the dribble, which creates issues for defenders to be able to stay in front of him.  What stood out to me was how accurate of a passer Vanharen was, as he created many different scoring situations for his teammates in the lane, and from the 3-point line, once he broke his defenders down and was able to get to the place on the court he wanted to.