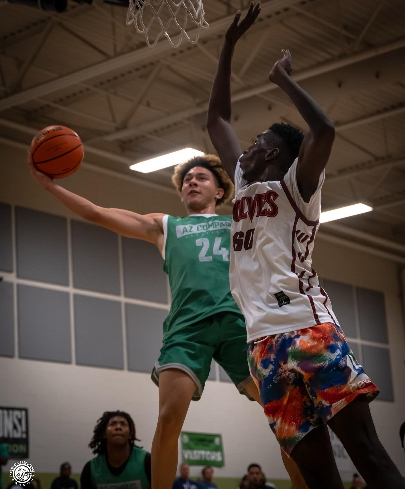 The Portland basketball staff, led by second-year Head Coach Shantay Legans, worked hard to land Delano, and recruited him as hard as anyone else among the nice list of suitors that offered Delano. Portland assistant coach Jeremy Pope was instrumental in the recruitment of Delano to the Pilot program. Pope first discovered Delano as a youngster, while Pope was previously coaching at AZ Compass Prep.

Delano will look to officially sign a national letter of intent this fall, during the Early Signing Period in November. Congratulations to Vince and the Delano family, his mother Carolyn and father Todd, on this amazing accomplishment and also to the AZ Compass Prep program on another Division-I signee.

Arizona Hoop Review Scouting Report: Delano is a nice looking point guard prospect that has developed nicely over the past several years, and he is now coming into his own as a player. He is a tremendous athletic talent that is capable of dunking the basketball in traffic and over defenders. He is physically very strong and has excellent explosion off the floor. He has a complete ability to score off the dribble against defenders, or shoot the basketball with a nice jump shot and with excellent range. He has a scorer's mentality and has become an excellent scorer from either guard position. He has a quick release on his shot - making him very difficult to defend, as a result of his ability to make plays off the dribble. He also plays fast and can create off the dribble for himself and his teammates. Plays with good overall energy on the floor. Delano is also a very good facilitator - an excellent ball handler and passer that sees the floor and pushes the basketball up the court. He is also a very good defender that plays passing lanes, and is a very strong on-the-ball defender that accepts challenges. Has a lot of upside.