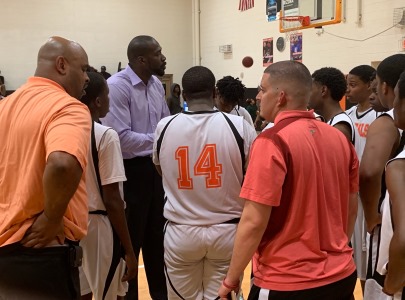 He was the top high school player in the nation in 2002 and a sure-fire NBA draft pick, but after skipping the NBA for a college career at Villanova, and also after five surgeries on his knees, New York's former McDonald's All-American Jason Fraser's playing career would soon be over.  After he recently spent some time doing Player Development for the Phoenix Suns, Fraser now is coaching in South Phoenix at CAA 2-time defending State Champion Skyline Prep.

It's been a long road, but not a disappointing one for Jason Fraser.  The former superstar post played for one of the top club teams in AAU history, the New York Panthers, which also featured NBA performer Charlie Villaneuva.  Fraser was a household name among NBA scouts, but after suffering numerous injuries in college Fraser developed a life after his playing career, coaching basketball.

Fraser spent some time in the NBA coaching and developing players with the San Antonio Spurs, and most recently the Phoenix Suns, before being hired by Skyline Education as their head coach and Director of Operations.  Fraser's strong background in behavioral health has helped him to transition to coaching the youth at the Skyline program, while also utilizing his faith and ministry background to develop the students that he comes in contact with.

Fraser is an ordained minister and recently received his certification to conduct ministry, something he has devoted his life to.

"God has a plan for everyone's life," stated Fraser.  "He is using me to help change the lives of these young men.  God has blessed me and I want to do everything I can to take advantage of his blessings."

Fraser inherited a ball club this season at Skyline Prep that is very young and inexperienced in high school basketball.  After the Skyline Prep program won the last two Canyon Athletic Association (CAA) Division-III state titles, the school lost (9) student-athletes from last year's team to graduation - making this year's team very young and in need of extreme player development.  No one better than former NBA player developer Jason Fraser for the job.

Standing 6-foot-10 in height, Fraser stands out a great deal among his players, as he does not have a player taller than 6-foot-2.  Fraser gives his all daily to any students that he comes in contact with, and during his team's game against sister program, AZ Compass Prep on Monday evening, Fraser could be seen coaching his team as if he was playing in the contest himself.  His team would get down early, but then fight back in the second half before losing at home.

"Anyone that knows me knows that I'm a competitor," said Fraser.  "I'm teaching these kids how to compete like me."

While the Skyline team has struggled to win games early in the season, and looks much different than the Skyline teams the past few seasons, Fraser is working extremely hard to make a difference in the lives of the young men in his program - teaching fundamental life skills just as much as fundamental basketball skills.

"These young men are going to learn how to win on the court and how to win in life," said Fraser.

Fraser took over the Skyline Prep program this season, after the departure of former terrific young Head Coach Jace Romero, who went to 3-straight Division-III state titles.  Romero decided to quit coaching for the time being and pursue another career altogether.  Fraser has picked up the torch left by Romero and is planning to build the program back to a winning level.

It is unclear as to how long Fraser will coach at Skyline Prep, as he is a future college or NBA coach certainly, already possessing excellent past pro coaching experience.  Fraser has no plans of leaving anytime soon, and as long as he is part of Skyline Education, he plans to give his all everyday, just as he did as an elite performer for a winning Villanova program.