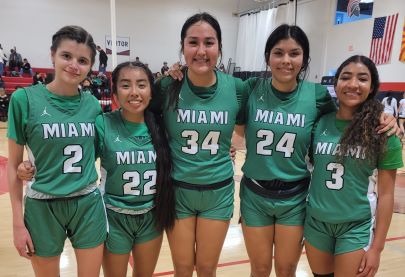 During the 2020-2021 season, the Miami Vandals had a regular season record of 1-12. Former San Carlos High School Football Coach Shawn Pietila ended up relocating down the street to lead Miami’s Athletic Program as the Director of Athletics. It was not long that his wife, Crystal Hooke-Pietila (former San Carlos Head Girls Basketball Coach) ended up taking over the vacant Head Girls Basketball Coaching position at Miami.

In her first season (2021-2022) at the helm, Coach Pietila led her Vandals to an overall record of 19-5 record, where she won the 2A South Region Championship and Coach of the Year. Composed of mainly freshmen, her Vandals were upset in overtime by Arete Prep in the first round of playoffs.

Currently, the Vandals have an overall record of 15-6 with a #8 State Ranking and #3 Region Ranking. Last night, they beat a solid Leading Edge team, which could be a preview of one of the state's Final Four games in my prediction (depending on final seeding). Here are the prospects who caught my attention:

Dosela is an excellent gem find, as she is a highly skilled point-forward prospect with good ball handling, passing, three-level scoring and defensive ability. Although she struggled to find her rhythm in the first half against Leading Edge, she contributed in other aspects to still make a huge impact in her team’s win. College coaches could utilize a foundation player like Dosela.

Thompson had a quiet game, however when you look at the stat sheet her impact was loud and clear. She contributed 13 points, 12 rebounds, 1 assist, 3 steals and 1 block in the region win. If she can continue to have big contributions, I anticipate Miami making a deep playoff run this season.

Pietila is the athletic playmaker who contributes in multiple ways. Whether it’s facilitating the offense or making defensive plays, Pietila looks to produce on the stat sheet. Her athleticism makes her a matchup nightmare, as she is so explosive, strong and quick.

Goss is tough as nails. Her stats may not jump out at you, but her constant defensive pressure irritates her opponents enough to cause turnovers. She utilizes her length and quickness to attack defenders downhill to draw them into foul trouble. Once Goss and her team are clicking on all cylinders watch out, as they are tough to beat.