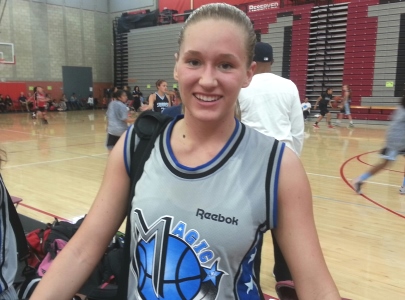 One of the top girl's prospects in Arizona's 2015 classis not a household name and has recently emerged in the state of Arizona as one of the top post players in the class.  Through hard work and development as a player, Valley Vista High School's 6-foot rising senior forward Lauren Ames has improved a great deal throughout the spring.  Through her improvement as a player, Ames has become a solid college prospect.

Ames has not been a stat-sheet stuffer throughout her high school career, and really has not been counted on yet to be a huge contributor on the offensive end.  Instead she has been delegated to being a rebounder and part-time scorer in the paint for her Valley Vista HS team.  Through patience, hard work and development from high school head coach Rachel Matakas and assistant coach Tresa Reible, Ames has improved a great deal as a player over the past year.

Reible is also Ames' club coach with the Arizona Magic Elite girls program - a team that has emerged this year as a strong girl's club program in the state and features superb rising junior guard Raina Perez.  Perez was a 1st-Team All-State selection this year by the Arizona Republic newspaper as a mere sophomore.  Playing with Perez and other top girl's prospects on her club team, Ames has become a force on the low block - scoring with either hand inside the paint and also showing good versatility and an ability to knock down the perimeter shot.

Ames will travel abroad this summer with her Magic program to numerous events and will look to garner much more recruiting interest for herself.  Her amount of recruitment will depend heavily on the performance of her team during this July evaluation period.

She has really put herself in a good position through her progress as a player, and should gain valuable experience for next high school season - making Valley Vista definitely one of the teams to compete for a Division-I state title next season.