Valley Vista Puts It All Together In Horizon Blowout 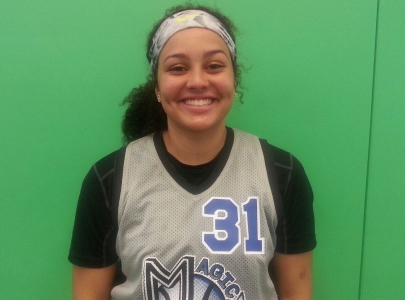 Valley Vista High School (8-3) is as good as any girls team in the state this season, and is absolutely deep and loaded with talent.  While the team has suffered three losses this season to three of the top girls basketball programs in the state, Seton Catholic, Dobson and Mesa Mountain View, the girls are back playing strong - winners of their last four games on the season.

On Friday evening, the team would travel to take on a good Horizon HS (7-3) team on the road.  While it seemed like a great match-up between two very good teams, Valley Vista would put it all together on the night - proving just how good they can be.  Valley Vista would come out absolutely on fire in the game - starting the game off with a huge opening run, which would allow them to gain a large lead early, and not look back.

Horizon would finally score before the end to the first period, as Valley Vista would go into the second period with a 20-2 lead.

In the second period, Horizon's gifted 5-foot-10 senior guard Andie Easley would get much more aggressive offensively and look to bring her team back.  She would finish the first half with 7 points, but would be unable to take on the task of slowing Valley Vista down by herself.  The two-person combination of Easley and Katie Grant, is a nice one-two punch that usually works very well against their opponents, but on Friday evening Valley Vista would be too much.

Valley Vista would be led in the game by a very well balanced attack, as almost everyone on the team would score in the game.  6-foot-1 sophomore post Kiara Edwards would lead the way with a team-high 10 points in the win.  Horizon would be led by the play of Andie Easley who would contribute a game-high 14 points in the loss.

Valley Vista will now move on to face Chandler High School on Monday (12/15).

Valley Vista Notes:  Valley Vista is as talented a team as there is in the state this season in girls high school basketball.  The team is still defining their roles on the team, and with such a loaded team, roles can be very difficult to develop over a season where everyone wants to score.  Matakas will have her work cut out for her this high school season looking to build a set rotation as the season winds down in late January.

This team is absolutely loaded, beginning with young future star post prospect Kiara Edwards.  If Edwards can continue to establish herself in the post each night by improving her shot selection and consistently finishing strong in the paint, this team will be very tough to beat late in the season, since they are so quick on the perimeter and keep coming at you defensively - pressing throughout the game and keeping players fresh.

Another star young guard prospect, 5-foot-10 freshman guard Raya Craig is a true talent for the big stage, and has made the transition from junior high school to varsity high school basketball quite easily.  Craig is a big-time talent for the future and she will have to continue to come up big for Valley Vista late in the season.  Very few high school teams around the state have Valley Vista's combination of post talent and guard and wing prospects.  They really have it all and can become as good as they want to become this season.

Horizon Notes:  Horizon is led by the strong guard play of Andie Easley and the post play of Katie Grant.  Easley is a very herky, jerky guard prospect with a nice feel for the game, and an ability to create scoring opportunities for herself and her teammates off the dribble.  She has an exceptional handle of the basketball and can get almost anywhere she wants to on the floor.  She also possesses a very good shooting stroke with nice range, and has a good overall mid-range game.  Easley can have questionable shot selection at times, but she plays very aggressive offensively and is always in attack mode.  She pushes the ball up the floor and advances the ball to the open player on the break.  A nice looking but underrated guard prospect that is a low to mid-major division-prospect.

Katie Grant is the force in the middle for Horizon and is also the foundation that everything for this team will be built on this high school season.  While Grant does not look to score much, she is very capable of doing so and has good low-post footwork and a skilled left handed touch inside the paint.  She primarily is a rebounder and shot blocker that does both very well.  She keep the ball up high on her rebounds and post moves inside, and is a solid finisher right now that will improve a great deal more over time.  She has the intangibles though as a post player and understands how to block shots and keep the ball in paly, allowing her to help ignite her team's fast break.  Horizon will need to include Grant much more in their offense to have the kind of season they desire in the Division-I ranks.  Grant is as strong a developing inside presence as there is in the state, and has the ability over the next year to develop into something similar to Kristine Anigwe in the paint for opposing teams.