Uriah Tenette Is A Top 2025 Prospect 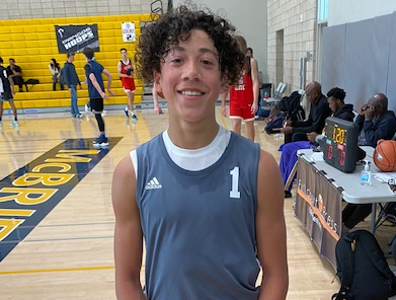 Prescott High School's 5-foot-7 freshman guard Uriah Tenette is a superb rising young talent with impressive athleticism. Uriah is one of the best guards from Northern Arizona, and is developing a lot of experience early in the process. He played two varsity sports this season as a freshman, as he played football and basketball for Prescott High School.

Uriah had an outstanding high school basketball season. Uriah scored 443 points this past season as a freshman, and is one of the top scoring PG's in the state's 2025 Class. He also shot an impressive 47% from the field and 80% from the free-throw line.

Uriah was born and raised in Sacramento, CA. He moved to Arizona a couple years ago. What started Uriah playing the game - he had two siblings who played the game. Uriah grinds hard as much as he loves the game. Uriah made a 10-foot 3-pointer when he was 5 years old. Uriah showed high confidence against any competition he faced, and he started to play against high school talent when he was in 5th grade. Uriah was able to shoot 3’s from NBA range when he was in 5th grade.

Uriah has a pure stroke. He’s got nice athleticism and jumps high enough to dunk already. He can score from all three levels. He’s got a ton of tools to play at the next level. His speed and quickness gives him an advantage to score or make a play.

Just recently Uriah had a phenomenal 43 point game at the Pangos Best of the West Shootout. After his performance, Uriah got an invite to participate in the Pangos All-American Camp. Uriah has been improving a lot. His personal goal is  to play at the D-I level, and his team goal is to win the State Title for Prescott High School.

I will keep following up on Uriah success going forward. He’s just scratching the surface.