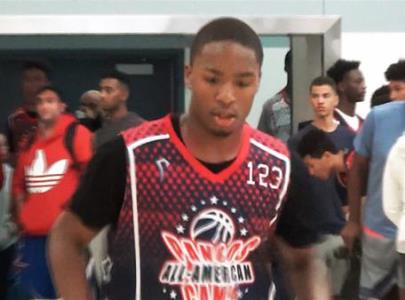 After deciding to leave Desert Vista High School recently for his senior season, and to go the prep school route for his final year, 6-foot-2 senior talented point guard Tyrek Chambers has landed at a prep program in the valley, after deciding to take his game to Bella Vista Prep.

Chambers will provide the Bella Vista program with a gifted point guard prospect for the season, after the recent departure of senior point guard Julian Dozier, who returned home to his native home of Michigan for his senior season.

Chambers is also in the process of deciding on a college homes, and has narrowed down his list of college suitors to (3) college programs.  After previously receiving offers from UNLV, Cincinnati, Providence, UAB, New Mexico, Murray State, Utah State and Oakland, Chambers has now narrowed his list of schools down to UNLV, New Mexico and Utah State.  Chambers has not indicated yet which school is in the lead for his services, so it will be very interesting to see where he ultimately lands for college as well.

Chambers is a serious guard prospect that is a big-time scorer of the basketball from all 3 levels, and also is an excellent ball handler and passer.  He is a complete offensive performer that is fundamentally sound and makes the game look easy.  He makes players around him much better - an amazing attribute.  He has a superb future ahead of him, once he can establish a foundation for himself.

Chambers has had to overcome serious obstacles in his life to get to this point.  Chambers was shot several years ago and overcame a bullet wound to return to the basketball court, and dominate his competition.  While a product of the city streets, Chambers was able to utilize his skillset in basketball to make a better way for himself - making him a very tough competitor, mentally and physically.

I will continue to follow the college recruitment of Chambers closely this fall, and bring you any updates as they continue to develop.

Arizona Hoop Review Scouting Report:  A native of Brooklyn, New York where he attended acclaimed Christ the King HS, Chambers is a very skilled and electric guard prospect that likes to make plays off the dribble, while also possessing an excellent shooting stroke with serious range.  He likes to handle the basketball as much as possible, and create scoring opportunities for himself and others, also as often as possible. He is an excellent ball handler that can get to where he wants on the floor, and also get into the lane and finish with a variety floaters and layups. He pushes the basketball up the floor and is a floor general with the basketball in his hands - surveying the floor and managing the game.  Chambers is also a very good defender that sits low defensively, and has excellent on the court anticipation, which leads to steals and deflections in the open floor.  Overall, a top-rated point guard prospect that will benefit any team a great deal.  Has a ton of talent and has overcome serious adversity in his life.  A nice talent.