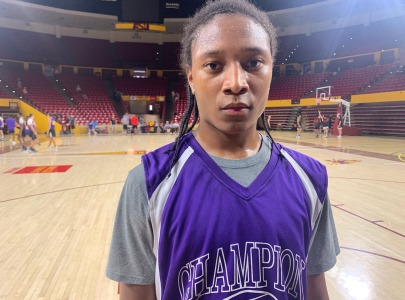 A new chapter will now unfold for former Cesar Chavez High School's talented 6-foot-4, 180-pound junior guard Ty Ty Washington - one of the top 2021 guard prospects in the country. After a recent fighting incident that broke out between players, fans and parents after a game between Chavez and Skyline High School, Washington was suspended by the school, and found his future at the program in jeopardy. As a result, Washington has decided to transfer schools, and has enrolled at AZ Compass Prep.

While it was thought that Washington and his Chavez team would compete hard this season for a 6A Title, a lot has now changed, as Washington has left for AZ Compass Prep - taking Chavez's title hopes with him. The recent brawl video went viral nationally, which created a lot of pressure on the school and district, but all that is now behind Washington, as he will now team up on an absolutely loaded Compass roster for the remainder of this season, and also next season - joinng fellow nationally top-rated 2021 prospects Frankie Collins and Maxwell Lewis at the program. The new trio of Washington, Collins and Lewis is formidable, and instantly becomes one of the elite trios of players in America.

Unlike local high school programs in the AIA, Washington will be eligible to play immediately for AZ Compass Prep - a very nice feature and option of the prep school ranks. AZ Compass Prep is also one of the featured teams on the national Grind Session, and so Washington will now be competing against a much higher level of competition daily in practice and in games, and on a national stage, which will only benefit him a great deal over time from a recruiting standpoint.

Washington is a superb talent with excellent size as a combo-guard. He is very skilled off the dribble and can create a shot for himself, almost at will. He gets to the basket very easily and can create shots for himself or his teammates, when he decides to make things happen off the dribble - making it very difficult for opposing defenders to stop him or even slow him down.

Washington is among the state's elite overall talents, and last high school season, as a junior, he definitely proved it as he led his high school program to a big 24-5 overall record on the high school season, while averaging a team-high 23.2 points, 4.4 rebounds, 4.1 assists and 3.3 steals per/contest.

I will continue to follow Washington's progress at AZ Compass and his recruitment closely, and bring you any updates as they continue to develop.

Arizona Hoop Review Scouting Report:  Washington is a superb talent with excellent size as a combo-guard. He is very skilled off the dribble and can create a shot for himself, almost at will. He gets to the basket very easily and can create shots for himself or his teammates when he decides to make things happen off the dribble - making it very difficult for opposing defenders to stop him or even slow him down. He can score with either hand when attacking the basket and is a very strong penetrator and finisher in traffic, where he is able to score over bigger defenders in the lane, and with contact. Washington is an excellent shooter of the basketball with nice range on his shot, and also has a strong mid-range skillset that allows him to keeps the defense on their toes when guarding him.  Able to make shots with regularity, even when contested closely, and has a lot in his bag of tricks - making him difficult to defend.  An excellent ball handler with an ability to get where he wants on the floor.  A very good passer that sees the floor and makes players around him better.  A good defender that plays passing lanes and has quick hands.  An excellent guard prospect that competes and accepts challenges on the court. One of the elite prospects in Arizona's 2021 Class.