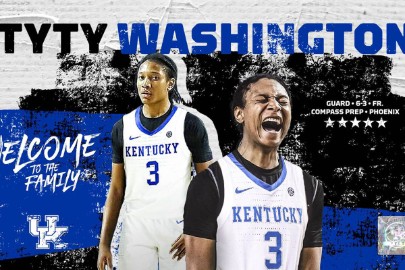 After an historic season in 2021, capping off an historic high school career, AZ Compass Prep 6-foot-4 gifted senior guard Ty Ty Washington added to his tremendous season and story on Wednesday evening - giving a huge verbal commitment to the University of Kentucky, in front of a large number of fans and media in attendance. The announcement by Washington came after he had narrowed down his list of colleges, before ultimately making his final decision for the Wildcats' program.

Washington had narrowed down his list of college programs to Baylor, Kansas, Arizona, LSU, Auburn and Kentucky, before making his final decision on Wednesday evening. He had also considered heading to the G-League and skipping college all together, but he eventually chose to go to college instead, where he will now go to Lexington, Kentucky - becoming the first Arizona prospect ever to play at the historic program.

Washington was selected as our Arizona Preps Player of the Year for the 2021 season after the terrific high school season that he produced. No student-athlete in America did more for their program this high school/prep season than Washington, and no other prospect in the state's history has seen such a dramatic rise in their national player ranking in one high school season ever. Washington went from an almost unranked prospect before he entered AZ Compass Prep early in his junior season (2019), and and is leaving as the #12 overall ranked prospect in America's 2021 Class by ESPN! This is an unheard of occurrence, especially for prospects in the West and, especially Arizona - a state that rarely has Top 20 nationally ranked prospects.

Washington was absolutely unstoppable all season long and had one of the very best individual seasons in Arizona history - leading AZ Compass to a #1 national ranking during the season, and a National Championship on The Grind Session. Washington led AZ Compass to the GEICO Nationals on ESPN, where he showcased his talents on national television, and came up just short of leading AZ Compass Prep to a National Championship.

Washington was as hot a prospect as there was in America currently, after he recently decided to de-commit from Creighton University and re-open his college recruitment.

Washington is a superb talent with excellent size as a combo-guard. He is very skilled off the dribble and can create a shot for himself, almost at will. He gets to the basket very easily and can create shots for himself or his teammates, when he decides to make things happen off the dribble - making it very difficult for opposing defenders to stop him or even slow him down. He is also a pure shooter of the basketball with amazing range on his shot. An excellent ball handler and passer, Washington is a pure point guard and floor general that sees plays before they happen. He is a rare find among today's guards. Washington is a winner and makes players around him better. He makes the game look easy and is a unique find among today's guards, as he is very unassuming but is an absolute killer on the basketball court. He loves the game and enjoys making players around him better - a lost art today.

Kentucky is regarded as the nation's premier college program annually for producing NBA players and also competing for national championships. Washington will have an opportunity to step right in as a freshman, as the program is in desperate need of a point guard for next season, as evidenced by the program's recent struggles this past season. Washington is ranked anywhere from 6th to 20th in the rankings for the Class of 2021 by all of the major recruiting services. He's also coming off a game-high 22 point performance in the Iverson Classic over the weekend, and also won the Three-Point Contest in the event.

Washington became a major story in the state of Arizona throughout the summer (2020), as he soared in numerous events and was the talk of Arizona basketball, as a result of his consistent exploits on the basketball court. Washington torched his competition consistently and often throughout the summer and fall, regardless of the COVID growing pandemic, which raised his recruiting stock and respect among the nation's top scouts and media. Washington's terrific performances against the top talent in the West, raised his recruiting stock - making his recruiting decision much more important to the basketball community this week. Washington made a tremendous jump in the national player rankings this high school season, as he went from an almost unranked high school prospect to a national Top 20 prospect by everyone.

Washington is a integral member of the Arizona basketball community and has grown up through our eyes in the state, so when he made his decision for a college program on Wednesday, for a second time, it felt like one of Arizona's own had reached a milestone in his basketball career. With so many people around the state pulling for Washington's success, it felt great to see this young man climb the recruiting plateau - announcing his decision to sign with a high-major Division-I college program.

Washington's story is a unique one and one to remember for the ages, as he overcame serious adversity in his life to become the young man he is today. Washington went through a lot after the incident at Cesar Chavez High School, transferring schools in the middle of his junior season and then helping take AZ Compass Prep to a #1 national ranking in the country. If you were not a fan of Washington's before this high school season, then you should have become one by the end of the season. I found myself literally cheering for Washington and the AZ Compass Prep team in my living room as the program played on ESPN on national television for a national championship. Not because I know Washington any better than anyone else, or because I like the staff at AZ Compass Prep anymore than I like any other program in the state. Instead, I simply love this story and love any young man that can overcome obstacles in his life to reach success, at any level.

In life, so many times, the youth make mistakes in life, and, often times, they are given up on, without a second chance. I am a huge supporter of second chances, and even beyond that, if the individual wants to work hard and overcome their challenges in life, then I am all for it. Life can be hard, and we can make it harder with the decisions we make in life, and it makes the success that we can achieve so much sweeter. Washignton is and has become a role model for youth in Arizona, that if you fall down, just get right back up and fight. Nothing comes without serious work ethic, but it can be done with support and focus on your craft, on and off the basketball court.

While many other times that our state has an elite prospect, that prospect has not always recognized the state of Arizona or promoted Arizona as a student-athlete. This is also not the case with Washington, who is Arizona's own - a student-athlete from South Phoenix and one that will wear it proudly.

Congratulations to Ty Ty Washington and his family on another amazing accomplishment for himself from our Arizona Preps's staff, and we wish him continued tremendous success in the future, as he takes his heroics to the University of Kentucky and plays for historic Head Coach John Calipari. This is not the end to the story, as it becomes just the beginning for the future of one of the best prospects to ever come out of this state.