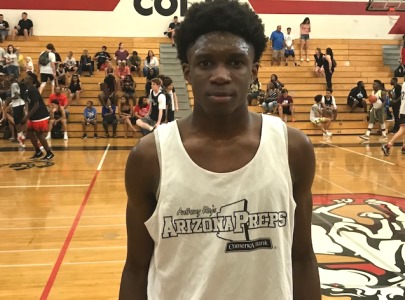 This year's 2nd annual Southwest All-American Camp was terrific and loaded with basketball talent.  One player that emerged from this year's camp and is now one of the hottest young prospects in the state is 6-foot-3 rising junior guard Ty Harper.  Harper recently moved to the state of Arizona from Georgia, and is now in the process of finding a school for himself.

Harper will now look to decide on a school for next fall, and could decide between a prep school and a top-rated AIA high school program in the state.  Regardless of which direction he decides to go, Harper will look to become a top-rated prospect.

Harper is now a hot prospect in the state after a strong performance in this year's Southwest All-Amercian Camp, where he performed at a high level in front of numerous elite scouts.  Harper will enter the fall as a highly sought after recruiting target for the future.

Harper is an ultra-athletic guard prospect with NBA athleticism already.  He has better than a 40 inch vertical and soars well above the rim.  He finishes exceptionally well and is terrific in the open floor or while slashing to the basket, where he has excellent body control and a super live body.

Harper does need some work on his jump shot.  Currently he is a solid mid-range shooter but lacks any true range on his shot.  He does possess excellent work ethic though, which allows him to improve quickly.  He also is a sponge for development, which should benefit him nicely over time.

Harper is a sure-fire prospect for the future, and he will look to gain some serious exposure to college coaches this July, as he travels on the Adidas circuit with Team Harden.  Harper could become a nice recruiting target after his performance this summer, which would allow the state another top-rated prospect for college programs to pursue.

I will keep a close eye on Harper and his decision for a high school program, and bring you updates as the story develops.