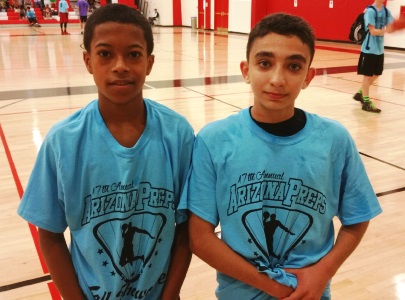 The Arizona Preps Fall Showcase recently took place on the campus of Glendale Community College, and this year's Showcase was as exciting as ever with many top performances from numerous prospects in the event.  This year's event also included some younger prospects that showed very well in the event - prospects that we would like to feature as some of the top young performers to watch for in the future.

Two young performers that I was impressed with in this year's event were a middle school prospect and another prospect that was middle school aged - freshman guard Ari Jones of Desert Vista High School, a member of the 2019 class, and Umbero Ambra, an eighth grader from American Leadership Academy - a member of Arizona's 2020 class.

Jones is a very young freshman prospect.  Only 12 years of age, Jones is entering his freshman year at Desert Vista HS.  Jones is a gifted young guard prospect with a nice handle of the basketball and an ability to get to anywhere he wants to on the floor.  He has a nice ability to blow past defenders and finish in the lane with floaters, and is also able to create his own shot off the dribble at any time in the offense.  Jones has excellent quickness and plays with a high level of confidence with the basketball in his hands.  He is also a very good shooter of the basketball with nice range on his shot, making him very difficult to defend for opposing guards.  Jones is also a very good passer of the basketball and has a knack for finding the open teammate on the floor.  He also pushes the basketball up the floor at a high rate.

Jones is also a very good defender with quick hands and feet.  He should only continue to improve in this area of his game, and will need to continue to focus defensively to round out his overall approach to the game.  He plays passing lanes and is able to apply pressure on opposing guards with the ball in their hands.

Umbero Ambra is an electric scorer of the basketball that is capable of putting up points in a hurry for his young age - possessing a nice shooting stroke with range and a quick release on his shot.  Ambra also has a very good handle of the basketball and can create his own shot off the dribble as well - making him very difficult to defend as well for opposing guards.  Ambra also pushes the basketball up the floor, applying pressure on teams to transition defensively.  Ambra has a variety of offensive moves that he uses to free himself up for scoring opportunities, and has good quickness with the basketball in his hands.

Ambra also sees the floor and is able to create scoring opportunities for his teammates, but he will definitely need to improve his ability to operate a team from the point position over time.  While he should continue to grow a great deal over the next five years of his basketball career, before reaching collegiate athletics, his best future will be at the point guard position, where he will need to develop into more of a floor general over time to maximize his potential as a college prospect.

Ambra is a good defender with lateral quickness as well, and will also need to continue to focus defensively to maximize his potential as a college prospect over time.

Both of these two young performers caught the attention of their coach in the event, long-time Arizona basketball aficionado Alvin Lewis.

"These two young men can play," said Lewis.  "I was very impressed with their confidence with the basketball, and both of them were getting it done against much older players.  They were fun to watch."