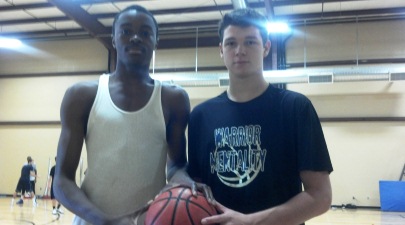 Westwind Prep Academy (WPA) underwent a major change in the spring, as the program hired long-time successful head coach Jeff De Laveaga.  Immediately the school's basketball program saw an instant development of the school's level of talent and commitment to developing it's student-athletes.

While there are many student-athletes that have received much attention at the school, two post prospects have caught the eye of many of the college coaches in attendance for the school's practices.

7-foot, 205-pound senior post Namdi Okonkwo and 6-foot-10, 235-pound senior post Miles Martin are two uncommitted post prospects that have both picked up their senior seasons at Westwind Prep - both in hopes of developing as post players and improving their college recruitment.

Okonkwo is a native of Texas and came to the Westwind program as a project with loads of athletic potential.  He has only played the game for several years and did not participate in high school athletics last season as a junior.  A very raw talent fundamentally, Okonkwo is very athletic physically - able to play well above the rim on dunk attempts and while finishing strong inside the paint.  He still needs to develop a great deal offensively and also in his footwork and low post moves, but he is a definite talent with major upside.  He is an active shotblocker with nice length of body and is a solid rebounder, although he needs to continue to add more size and strength to his thin, athletic frame.  Okonkwo runs the floor very well and is a capable finisher in the open court, but still needs alot of work to reach his potential as a player.

Okonkwo's best attribute currently is his upside - his length and athleticism.  He also has a desire to improve as a player and will work.  This season spent at Westwind will serve him a great deal as he works hard to improve his approach to the game.  Currently, Okonkwo is a mid-major division-I prospect that will see his share of much higher recruitment as a result of his size and athleticism.

Miles Martin is a native of Cupertino, California, where he attended Homestead High School last season.  While Martin is also a developing post prospect as well, he is much further along offensively than Okonkwo, but not as athletic.  Martin is a good-sized post presence with a nice frame already, but still developing low post skills.  He has a soft touch from mid-range and has solid footwork, but still is improving his ability to make plays inside and finish strong around the rim.  He simply needs touches of the basketball and continued low post skillwork to develop as a post prospect for the collegiate level.  Martin is a solid rebounder but needs to become quicker off his feet to see improvement in this area of his game.  He runs the floor well for his size, but needs to be more athletic to become much more effective against top-rated low post prospects.

Martin's best attribute currently is his sheer size.  He also has some upside as a player, and has worked hard this fall to become much stronger physically and to tone up his large frame.  This season spent at Westwind will also serve him a great deal as he works hard to improve his approach to the game.  Currently, Martin is a low to mid-major division-I prospect that will see his share of much higher recruitment as a result of his size as a post prospect.

Both Okonkwo and Martin will team up with the school's top prospects on Westwind's National High School Team that will compete in 60 games this season - facing the likes of national champion Findlay Prep and many other top-rated high school programs across the country.