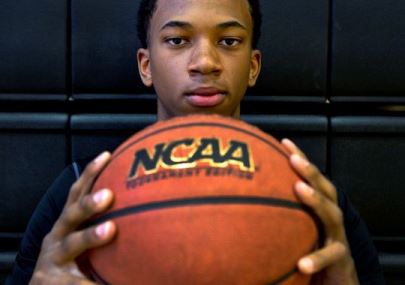 Corona Del Sol High School’s incoming 6-foot-10 freshman combo-forward Marvin Bagley is already the best prospect ever in the state of Arizona.  While only time will tell if he actually develops into the prospect we all think he will become, he is already a ridiculous basketball prospect with amazing potential for the future.  Bagley has not even entered the high school ranks of varsity basketball yet, and he is already drawing raves nationally from scouts and media.

College coaches are already taking strong notice as well, as this rare-level talent has emerged in the forefront of the minds of elite-high major college programs in America.  Last week, Bagley reeled in his biggest scholarship offer yet - from national basketball powerhouse, the University of Arizona Wildcats.  Bagley has quickly become a hot priority for head coach Sean Miller and his staff, and the Wildcats have made it clear that they will not let him go anywhere else.

Bagley also received an offer from University of New Mexico, as the Lobos are looking to gain recruiting position on another elite-level talent in the state of Arizona.  New Mexico recently reeled in commitments from fellow Arizona Power club teammates Dane Kuiper and Mitch Lightfoot.

Bagley should have a long, lengthy college recruitment, so we will see many, many more scholarship offers for this young man, who is currently trained personally by North Scottsdale's Padraig Obrien.

Our Arizona Preps staff will be tracking his progress very closely throughout this up-and-coming 2014-2015 high school basketball season.  He will be attending 3-time state champion Corona Del Sol (Tempe) High School, in hopes of leading the Aztecs to a fourth-straight state championship.

Arizona Hoop Review Scouting Report:  Bagley, simply put, is one of the most advanced young basketball players that you will ever see.  Already standing 6-foot-10, Bagley moves very well up and down the floor and already plays with a knack for the game well above his age.  He has a very quick twitch around the basket, in which he uses to get up quickly to for a finesse finish on either side of the basket, or just rise right up and power a dunk down – usually over defenders.  He also possesses solid footwork down low, as he feels where his defenders are on him, and will make a successful move around them, often with a double-team coming to him.  Bagley also has a very nice shooting touch which can extend out to 23-feet roughly, when left open in a half-court set.  He also can rebound the ball at a good rate over older defenders, and can lead a fast-break going the other way if need be.  Bagley is currently ranked as the Number #1 overall 2018 prospect in the country by numerous scouting services, and rightfully so.  Bagley looks to be a very special type of player in the future and will be the new face of Corona Del Sol HS, as well as Arizona high school basketball.