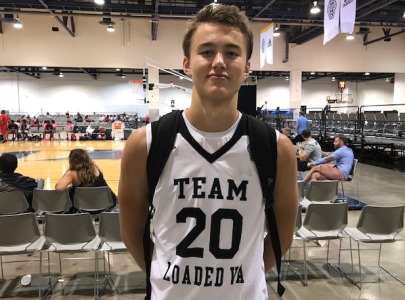 The time has been coming for several years, once it became obvious that former Pinnacle High School prospect, 6-foot-9, 210-pound rising junior forward prospect Patrick Kelly would develop into a serious division-I prospect.  Since leaving the state of Arizona a year ago to transfer to the state of Virginia, where he would pick up his high school basketball career,  Kelly has seen his progress as a player and, ultimately, his college recruitment begin to soar.

Last week while competing with his club program, the heavily Adidas-sponsored Team Loaded (VA), Kelly helped lead his talented 16U team to a strong finish in the Adidas Summer Championships.  In the event, Kelly was very consistent with his play - playing at a high level on both ends of the floor in the event.  While Kelly is known as an excellent shooter of the basketball, he also competes at a very high level and fights hard for rebounds, loose balls and looks to contest shots anywhere on the floor.

Kelly currently attends and will finish his high school career at Virginia Episcopal School (VES) and plays for well-known head coach Curtis Staples.  Located in Lynchburg, Virginia and founded in 1916, the Virginia Episcopal School is a private boarding and day school that is very successful in the state.  Staples is the all-time leading three-point shooter at the University of Virginia.

Kelly also currently possesses offers from Cal State Northridge and Florida Gulf Coast, to go with his two new nice offers.  Purdue, Wake Forest and Georgetown have each also expressed serious recruiting interest in Kelly, and all three schools are expected to intensify their recruitment of Kelly in the near future.

Kelly has grown a great deal over the last three years, since I first saw him.  He has grown a tremendous deal physically, as he now possesses a much stronger physical frame with broad shoulders, excellent length and superb athleticism for his age.  Kelly has a very promising future ahead of him, and is still growing a great deal.

Kelly is the son of former NFL player Pat Kelly, who was a 6-foot-8 tight end for the Denver Broncos (NFL).  His father passed away when Kelly was young.

I will be keeping a close eye on Kelly for the future, and will continue to follow his progress as a student-athlete and college recruitment very closely - bringing you any updates as they continue to develop.

Arizona Hoop Review Scouting Report:  Kelly has grown a great deal over the last four years, since I first saw him.  He has grown a tremendous deal physically, as he now possesses a strong, athletic frame with broad shoulders, excellent length and superb athleticism and lateral quickness for his size.  He should only continue to develop much more over the next (2) years of high school, and could grow to 6-10 in height.  Kelly is currently a versatile, stretch four-man that could develop into a small forward over time, later in his career.  As he continues to mature physically, he will only become much stronger, quicker and more athletic.  He is a big-time shooter of the basketball with excellent range on his shot and a quick release.  He is capable of making shots from anywhere on the floor, which makes him difficult for opposing post players to defend.  His best attribute is his tremendous work ethic and love and passion for the game of basketball.  Kelly's desire to be a player is tremendous and allows him to play with a very high motor, with excellent activity on both ends of the floor.  He is an excellent offensive rebounder that competes for balls outside of his area on the floor.  He runs the floor very hard and is an excellent finisher in transition.  An active shotblocker.  A capable ball handler.  A very good passer that sees the floor.  Has good upside as a player and excellent versatility.