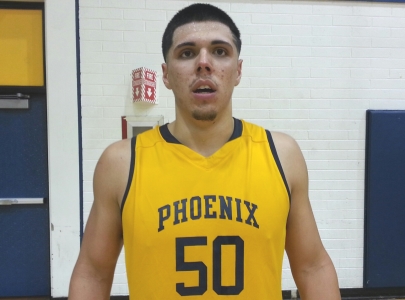 Phoenix College talented 6-foot-4 sophomore combo-forward Brandon Pineda-Morales helped lead his junior college program to a Division-II National Championship this season, after putting up consistent numbers throughout the season.  Pineda missed the start to the 2013-2014 junior college season after overcoming a bad ankle injury early on in the pre-season.  He would return to average 13.8 points and 6.1 rebounds, while shooting 49% from the field for terrific head coach Matt Gordon.

Tohono O'Odham Junior College 6-foot-7 sophomore forward Will Marshall was regarded as a very good prospect in high school, but has yet to reach his full potential as a player.  As a result, Marshall soared well below the recruiting radar, even though he averaged good numbers on the season as a sophomore - averaging 13.4 points and 6.9 rebounds per/game.

Both prospects, while being rated by the Arizona Hoop Review Scouting Report as two of the top overall prospects in the Arizona Community College Athletic Conference (ACCAC), would decide to sign national letter of intents with a division-II program.  After being recruited heavily by Arizona product and hard-working assistant coach Kevin Williamson, both prospects would sign with the University of Minnesota-Duluth.  Williamson who formerly coached at Yuma High School, has worked tirelessly to recruit Arizona's best prospects for some time and has been extremely successful landing many of the state's top overall performers.  Williamson has figured out the state and understands just how valuable it can be to recruit such an under recruited state where top-rated prospects can fall into your lap.