Tru Washington On Another Level Among 2023 Class 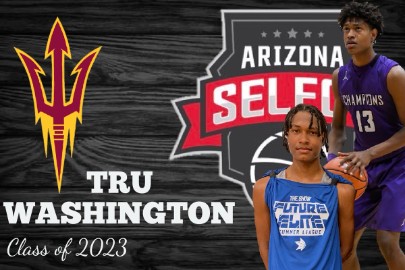 Since emerging on the Arizona high school basketball varsity scene in Arizona as a freshman last season, Mountain Pointe High School 6-foot-3 sophomore guard prospect Tru Washington has been on another level. While other top-rated prospects in the class were trying to make an impact at the varsity level, Washington was flourishing and already receiving Division-I offers from college programs. After only one season of varsity high school basketball, Washington has now become one of the best and hottest 2023 prospects in the West.

Washington burst onto the Arizona high school varsity scene last year, and put up very impressive numbers as a freshman. In fact, he was the second leading scorer for a very talented team last season that finished with a strong 22-7 season, even without the services of Ty Ty Washington last season, after transferring to AZ Compass Prep. Tru would average 13.6 points, 5.1 rebounds, 1.9 assists and 2 steals per/game, as a mere freshman starter in the state's top 6A Division.

This season, Washington has changed locations, and will now attend Mountain Pointe High School, where he will team up with a loaded group of guards, that includes two of the state's elite guard prospects in top-rated senior guard Jason Kimbrough and fellow 2023 star sophomore guard Mark Brown. The addition of Washington will give Mountain Pointe one of the best trios of guards in the state, in either high school or prep school. Washington already helped lead Mountain Pointe to a big scrimmage win over Bella Vista Prep several weeks ago.

Washington is already one of the elite 2023 prospects in the West, and even the country, when you consider that he now possesses Division-I offers from Arizona State, Nevada, UC-Santa Barbara, IUPUI and Portland State, and has not even began his sophomore season, as of yet.

Washington could have really generated much more recruiting interest for himself, had he been seen this past spring and summer. But, as a result of the COVID-19 pandemic, Washington was relegated to playing in local exposure events, where he showcased his advanced ability to score the basketball and make plays. In The Show's Future Elite Summer League, a league comprised of the state's top 2023 and 2024 prospects, Washington stood out among both classes of prospects as the top individual performer in the league, alongside St. Mary's fellow 2023 prospect Jason Fontenet.

Washington is an intriguing prospect at 6-3, as he is able to play as a combo-guard, but is at his best while scoring the basketball from the off-guard position. He has a nice shooting stroke with range on his shot and good consistency, which makes him difficult to defend for opposing guards. He is at his best when putting the ball on the deck and making plays off the dribble, where he is a strong finisher at the rim, as a result of his left-handed prowess, which makes him even more difficult to defend. He has excellent body control and is a strong finisher around the basket and in the lane, or in the open floor where he thrives. He also possesses a good mid-range game, which allows him to operate between the lines at a high level.

Washington is a strong rebounder from the guard position as well, and is able to post up smaller guards around the basket and be very effective at making plays or drawing fouls from the opposition. A left hander, Washington is a very good ball handler and does not play around much with the basketball. Instead, he makes plays efficiently and with purpose. He is a good passer as well, and sees the floor, while also pushing the ball up the court to the open player or teammate, and then filling the break. He likes to play fast and with good intensity and aggression.

Arizona's 2023 Class is quickly developing into a nice class of prospects, and Washington has rapidly emerged as an elite prospect in the class. It will be very interesting watching him continue to grow and develop over the next several seasons, as he is off to a very fast start already. He is very mature already physically, so he will only get physically stronger and more explosive over time.

This season, Mountain Pointe High School, which finished as the 6A State Runner-up for a state championship last season, will now be even better this high school season with the addition of Washington. Terrific Head Coach Kaimarr Price, who did an excellent job last season, in his first year at the helm, will have a much easier job this season getting the Pride to the top of the standings, especially with the services of the very talented Tru Washington on his roster.

I will continue to follow the recruitment and progress of Tru Washington closely over the next few seasons, as he looks to become one of the elite 2023 prospects in the country.