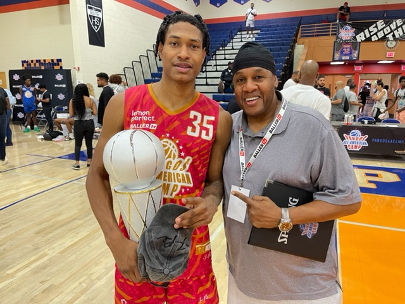 The state of Arizona was very well represented in this year's 20th Annual Pangos All-American Camp in Las Vegas, Nevada, as many of the nation's top basketball prospects from multiple classes gathered to take place in this year's exciting event/camp. With just about every NBA team represented at the event, as NBA scouts scoured the room alongside many other media and scouts, the atmosphere for this year's event was electric. With such a great environment for top-rated high school players to make a name for themselves, the Arizona basketball products in attendance did not disappoint, as each of the Arizona prospects in action did enough to help themselves in their reputations among the nation's top scouts, while also planting seeds for potential future NBA careers.

While Arizona's prospects made our state proud with their ability to compete and even play at a high level in the event, no Arizona prospect did more to help their cause than Mountain Pointe High School's 6-foot-4 rsing senior guard Tru Washington. The young uncle of 2022 NBA Draft prospect "Ty Ty" Washington, Tru had a terrific spring performance, and then capped it off this week with the Top 25 All-Star Game MVP. After being selected for the game, as a result of his strong performance in the camp, Washington came up big for his team in the all-star game, as he turned in another strong performance and won the honor.

Washington came into the spring already with a host of Division-I offers already for himself, as such programs as UNLV, TCU, LSU, Georgia, Portland, DePaul, Pepperdine, Arizona State, Nevada, UC-Santa Barbara, IUPUI and Portland State have each previously extended offers to him. While some of those offers have changed with coaching changes, I look for his list of offers to now grow, as new college suitors will look to get involved with him.

Washington has been on an absolute tear since the end to the high school season. After being suspended for his team's state playoff game at the end of the season, Washington returned to the court with vigor, and has poured in serious scoring numbers on the club circuit, and in this year's Pangos Best of Arizona League, where he was selected as the League CO-MVP. Washington was the leading scorer in the league and showed why many college programs have extended offers to him.

In the (20) year history of the amazing annual Pangos All-American Camp, it has been challenging for Arizona's top-rated prospects to earn invites to the camp. This year looked a lot different, as there were numerous prospects earning the invite and opportunity. Tru Washington earned the opportunity, and then made the most of it with his superb performance, as no Arizona prospect has ever won such an honor.

Congratulations again to Washington and his family on this tremendous accomplishment, and for representing the state in fine fashion.