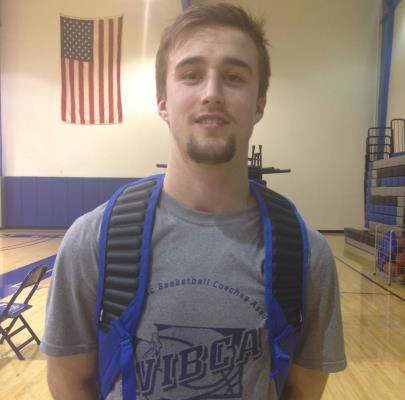 South Mountain Junior College is making a nice run at the right time of the season, after winning their last 3 games in a row.  Currently South Mountain ranks fifth in the conference, and second among division-II junior colleges in the ACCAC.  A big reason for the success of South Mountain has been the play of a trio of players - 6-foot sophomore guard Jackson Price, 6-foot-4 freshman forward Terrence Johnson and 6-foot-9 sophomore post Connor MacDougall (University of New Mexico signee).

MacDougall, Johnson and Price each rank among the top overall performers in the ACCAC this season, as all three prospects rank among the top 10 overall scorers in the conference - something I have not seen in some time in this league.  They are a perfect match together as well, as each prospect represents a member of the post position, wing and guard positions.  This talented trio has done it all this season for head coach Daven Vo and his experienced staff.

Saturday afternoon would be no different, as the trio would come up very big again for the Cougars in their home match-up with a Mesa JC (10-12, 9-8) team that has struggled this season to gain any form of consistency.  Mesa has had several injuries this season to key players for their team, and also lost their starting forward Mitchell Burnett to academics early in the season.  As a result, Mesa JC head coach Sam Ballard and his talented staff have had to endure many games this season where they have struggled as a team.  Ballard is one of the elite coaches our state has ever seen, in the juco ranks or high school.

Mesa would come into Saturday's game after defeating Glendale JC on Wednesday, 74-63 - looking to gain some momentum heading into the end of the season.

After holding on to a narrow lead at halftime over Mesa, 41-39, South Mountain would quickly build their lead to 9 points early in the second half, 52-43.  South Mountain would build their lead to 66-57 with seven minutes to play, but Mesa would bounce back behind the play of freshman point guard Obi Megwa.  After a nice driving reverse layup from 6-foot-10 freshman post Ed Hardt with 3:58 left to play, Mesa would make the game very close.  But South's Terrence Johnson would convert 2 of 3 attempted three-pointers late in the game, and Jackson Price and the South team would make 9 of 10 free throws down the stretch to secure the win, 80-73.

Mesa was led by Obi Megwa with a game-high 22 points, 7 rebounds and 6 assists.