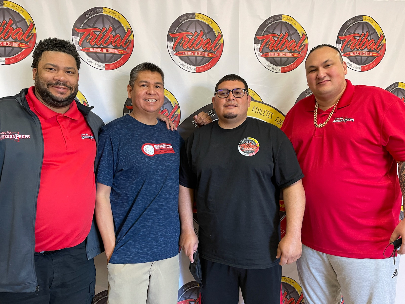 Tribe Athletics and Tribal Nations Recruiting continue to lead the nation by bringing the biggest and best exposure series for Indigenous student-athletes. This year’s event has drawn in over (152) boys and girls teams in multiple age brackets (middle school-high school). Director Jon Yarrow Jr. and co-director Cameron Smith continue to work hard to provide a platform and opportunity for Indigenous student-athletes to be discovered and recruited by college coaches and scouts.

This year’s event takes place in Las Vegas, NV at multiple facilities, to accommodate the amount of teams competing. Teams traveled from near and far to represent their communities, as this event is a big commodity, since it is the biggest Indigenous Basketball Tournament in the Nation.

Besides the large number of teams, Jon has worked hard in bringing in numerous scouting services, media coverage and college coaches to evaluate players. The games are being live-streamed on BallerTV, where college coaches who can’t attend are viewing games to find prospects for their programs.

Here is the dialogue from my interview with Tribe Athletics Director Jon Yarrow Jr. :

Q: What moved you to create an exposure series?

Q: How has your event grown since your first year?

A: We have increased participation from more teams from around the United States. We also have a stronger following, especially from college coaches and college scouts. This event is the premiere event to find the best Native American/Indigenous student-athletes.

Q: Your events are at a high demand. What are you looking to do to accommodate possibly more teams in the future?

A: Next year, we will be moving the Jr. Nationals Tournament to Mesa, AZ where we will be in a new bigger venue at the Legacy Sports Complex with (16) basketball courts under one roof.

Arizona Preps is pleased to have the opportunity to cover and scout the best Native American and Indigenous student-athletes. To provide ample coverage, we have (9) of our scout publishers providing coverage throughout the weekend.