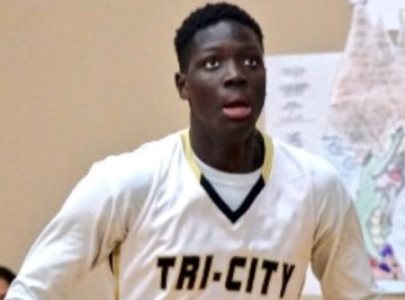 Last season, it was a different story for Skyline Prep, the defending Division-3 CAA state champs, as they would defeat Tri-City Christian Academy in the state semi-finals before winning it all.  The season before that, Skyline would win the state title by defeating Tri-City in the state finals.  This season though, Tri-City and Eduprize are the teams to beat in the state's Canyon Athletic Association (CAA).  After a recent loss to Eduprize, Tri-City Christian has gotten right back to their dominant winning ways this season.

On Monday evening, Tri-City and Skyline Prep would face off for the first time this high school season on Tri-City's campus, in a much different match-up from year's past.

Coached by former NBA coach and Villanova graduate Jason Fraser, Skyline Prep has made excellent strides this high school season under Fraser's strong leadership and commitment.  The program lacks the talent it once had overall, but the kids are tough and compete hard.

Tri-City Christian (16-1) is very talented this season.  Led by the play of 6-foot-11 junior post Fallou Diagne (pictured), the program is loaded with talent this season and is gearing up for a nice state playoff run.  Diagne is a formidable talent for the program and is a difficult match-up for any opposing team in the state, AIA or CAA.  The combination of Diagne and his talented cast of teammates on the roster were too much for Skyline Prep to handle on Monday evening, as they would build an early lead in the contest in the first half.

After taking an 18-13 lead after the first period, Tri-City would soar in the second period behind the sharp-shooting of 6-foot-4 junior guard Justin Solis.  Solis would knock down consecutive three-pointers in a row to give Tri-City Christian a 24-13 lead early in the period.  The combination inside of Diagne, 6-foot-7 senior post Jeikel Davis and 6-foot-7 senior Mamane Yaou would be big for Tri-City in the second period, and Tri-City would build a 40-21 by halftime.

Tri-City would not look back from there and would cruise to a big 76-43 victory over Skyline Prep.

Fallou Diagne would turn in an excellent performance in the win, and showed off his excellent motor - pouring in a game-high 34 points, 13 rebounds and 3 blocks.  Jeikel Davis finished with 12 points and  7 rebounds, while Mamane Yaou contributed 10 points and 6 rebounds and Justin Solis had 13 points and 6 assists.

Tri-City Christian 5-foot-9 senior guard Neo Powell, originally from Brooklyn, New York, is a true point guard prospect that knows how to run a team, and has excellent quickness on the defensive end of the floor.  He leads the team in assists and steals, and is a nice sleeper guard prospect . . .

Tri-City Christian 6-foot-7, 240-pound senior post Jeikel Davis has a 7-foot-1 wingspan and is a wide-body post prospect.  A native of Texas and originally from Costa Rica, Davis is a good low-post player that does not mind physical contact and is a solid finisher inside the paint.  A strong rebounder.  Runs the floor.  Currently receiving juco and local NAIA interest . . .

Tri-City Christian 6-foot-4 junior guard Justin Solis is a native of Costa Rica and is the 3rd leading scorer for this year's team - averaging 10 points and shooting 44% from the 3-point line.  An excellent shooter with a pure shooting stroke and unlimited range on his shot and a quick release.  A good ball handler and passer.  Sleeper prospect.