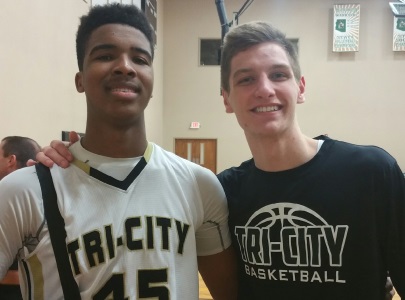 Skyline Prep (9-1) has been dominant this high school season.  Led by the play of star 6-foot sophomore guard Amari Hudson and talented 6-foot-7 junior forward Seth Mason, Skyline came into Thursday evening's match-up focused on proving that Skyline is the new power among the charter schools (CAA) in the state - an important honor.

Tri-City Christian Academy (8-0) has also been dominant this high school season, led by the superb play of terrific 6-foot-7 senior forward Brock Gardner (Liberty University signee) and developing 6-foot-8 junior post Nigel Shadd.  Gardner has been the top overall player and prospect for some time among all players in the CAA, and Thursday evening would be another opportunity for Gardner to prove just how special he is as a player.

The intensity for the game was at an all-time high and was infectious for all fans in attendance, as fans poured into the gymnasium early - creating a standing-room only atmosphere for the game.  This would be one of the most exciting games our Arizona Preps' staff has ever seen in the state of Arizona, and well-worth the price of admission.

Tri-City was come out very confident from the start, and would develop a 17-14 first quarter lead behind the strong play of Amari Hudson, as Hudson would almost bully his way to the basket over and around defenders consistently.  Brock Gardner would come out possessed in the game, scoring almost at will off the dribble and from the perimeter, while Nigel Shadd would dominate the paint defensively - blocking shots and rebounding hard over a smaller Skyline team.

After an inside basket and then an offensive rebound and put-back by Shadd, consecutive baskets, Tri-City Christian would gain momentum late in the first half - erasing an early first half lead by Skyline.  A back-door cut and basket inside by 5-foot-10 senior guard AJ Brown would tie the game at 22 all with 2:17 left to play in the first half.  After an Amari Hudson driving layup would give Skyline back the lead, Brock Gardner would drive hard to the basket and dunk the basketball with authority over a defender to tie the game.  But Hudson would come right back with a three-pointer from the corner, and then a steal and a transition layup as the halftime buzzer sounded - giving Skyline Prep a nice 30-24 lead at the half.

The third period would tell the story and would be big for Tri-City, as Brock Gardner would take over the game, and prove why he is considered by our Arizona Preps' staff as possibly the state's most dominant player.  With 5:30 left to play in the period, Gardner would take off on the break in transition and throw down a strong one-handed dunk over a defender.  He would then score strong back-to-back baskets inside.  After another offensive rebound and put-back by Nigel Shadd, Gardner would post up inside and score on a strong post move after being fouled on the play.  Gardner's three-point play would give Skyline Prep a 40-38 lead at the end of the third period - changing the momentum of the game considerably.

In the win, Gardner would prove just how good he is and how dominant he has been over a four-year span at the school.  While there is definitely less overall competition in the CAA from top to bottom, Gardner has been terrific in this league and against national competition throughout the spring and summer.  His performance on Thursday evening was as strong of a performance that I have seen in the state in some time, leaving everyone in the gym gasping that Liberty University got a flat-out steal.

These two teams will meet again in early February at South Mountain JC next time, and, of course, in the state playoffs at the end of the season.  You don't want to miss the next match-up.