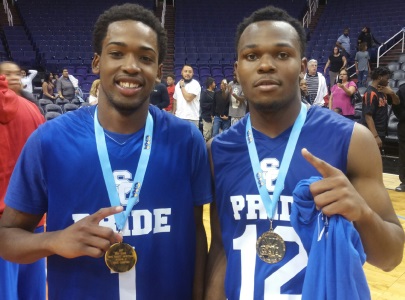 Tri-City Christian (20-1) had almost ran the table this high school season in the CAA Division - knocking off everyone of their opponents this season and looking to win it all in fine fashion on Tuesday evening at the Talking Stick Resort Arena.   To do it, they would need to defeat Student Choice Prep Academy again.  Tri-City had defeated Student Choice 47-44 in an earlier meeting on the season. It would make for a perfect season for do-it-all 6-foot-7 senior forward Brock Gardner (Liberty University signee), who has had an unbelievable season - making his case this season as the state's top overall performer.

For Student Choice (21-4), in their earlier loss, talented 6-foot junior guard Elijah Mead did not have a great game.  Mead would look to change things this time around, and lead his newly developed school to their biggest win in school history.  The school was organized previously by school developer and hard-working Nate Scott.  Scott's goal, when he created the school, was to bring opportunities to student's who, he believed, many other schools had given up on.  Both scenarios would make for a very exciting match-up and contest on Tuesday evening.

In front of a large crowd of fans and supporters on Tuesday evening, Student Choice would come out fired up and confident against the state's best CAA team all season - a team that featured Gardner and also imposing 6-foot-8 junior post Nigel Shadd.  Shadd received contact lenses for the first time in his life the day of the game, so he, like all of the players, would need to adjust to the conditions of playing in a wide-open arena with a back-drop behind the basket.

The adjustment would not affect Elijah Mead or Brock Gardner, as both top-rated prospects would catch fire early.  Mead would look flawless early, as he would start the game with two three-pointers.  Brock Gardner would knock down consecutive three-pointers for his team as well, and both teams would be tied, 8-8, with 3:57 left to play in the first period.  After another long-range three-pointer from Gardner, Tri-City would keep pace, as Student Choice would take a 16-12 lead after the first quarter.

Late in the first half, Nigel Shadd would get a nice two-handed dunk on the break, but again, Elijah Mead would connect on another long three-point bomb at the halftime buzzer to keep Student Choice ahead 34-28 at the half.

The third period would begin much the same as the first half had ended, with Mead scoring two consecutive baskets for his team.  The flow and momentum of the game would change dramatically though after Mead would be called for a technical foul after a play - forcing Mead to go to the bench for much of the third period.  As a result, Tri-City Christian would go on a nice run.

An assist to Shadd inside from a very unselfish Gardner would tie the score at 46 all with 1:35 left to play in the third.  After a jump hook over a defender by Shadd, and then a nice three-pointer by Gardner off the dribble, Tri-City would take a 51-47 lead after the third period.

The fourth period would make for an excellent conclusion to a wonderful game.  6-foot-4 senior post Stephan Williamson would make his presence felt in the fourth period, after battling Nigel Shadd all game.  The undersized post player would collect an offensive rebound and put-back with 5:23 left to play.  Then senior guard Tyler Motley would take over the game for Student Choice.  A nice transition basket by Motley, and then another strong driving basket by Motley with 2:50 left to play, would bring Student Choice to within one point of the lead, 58-57.

Student Choice would then put Nigel Shadd on the free-throw line three straight times, but Shadd would fail to convert any of the free-throws - going 0 for 6 in his attempts.  After an offensive foul was called on Shadd in the post with 1:20 left to play in regulation, Student Choice junior guard Charles Riggins would calmly sink both free-throws for his team - giving Student Choice a 61-58 advantage.

"Many of our kids thought the score was tied," said hard-working Tri-City Christian head coach and school administrator Paul Brown.  "We should have called a timeout.  Our kids could not hear us screaming at them to foul.  It's a tough loss."

For Nate Scott, after his team won it all and holding the championship trophy and with many tears flowing down his face, he said "I'm speechless.  This is amazing."