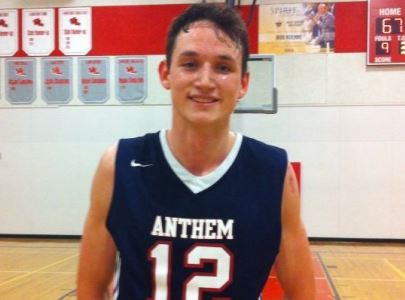 Portland State University head coach Barrett Peery and his staff are getting a steal, after receiving a verbal commitment from Anthem Prep High School's 6-foot-9, 190-pound athletic senior post Trey Wood.  Wood has been a very underrated prospect in Arizona's 2018 class for some time, and after receiving an offer from the Big Sky program recently, Wood decided to pull the trigger.

Wood decided to verbal to Portland State over another offer from UMASS-Lowell, so it doesn't look like much of a steal for Portland State, but it is.  Wood is a very underrated college prospect that I really like and feel was worthy of much more college recruitment than he received - proving just how underrecruited the state of Arizona continues to be.

Wood is a long, athletic post talent with a very high motor and a nice overall skillset.  He is a good shooter with range on his shot and has good low post skills that allow him to make plays around the paint.  He runs the floor hard and is an excellent finisher in the open court.  As he matures physically and adds more physical size to his long, thin frame, he will blossom into a serious player at the collegiate level.

Wood put up serious numbers as a junior last season, and will have just as big of a senior season for himself as well.  Last season as a junior, Wood averaged eye-popping numbers at Anthem Prep - averaging 23.6 points, 14.6 rebounds and 6 blocks per/game.  He had one amazing effort last season where he scored 42 of his team's 56 points in a loss.

Wood is also an excellent student, and is already a full academic qualifier.  Congratulations to Wood and his family and the Powerhouse Hoops program on this accomplishment.

Arizona Hoop Review Scouting Report:  Wood, while lacking physical size and girth on his long, thin frame, is very mobile for his size and runs the floor like a guard.  His ability to outrun opposing post players down the floor makes him an attractive prospect over time.  Wood has tremendous upside as a player, something we often talk about, but this young man has loads of it.  As he gains physical maturity he will blossom nicely.  Wood is an effective scorer currently on the low block with solid low-post footwork and a nice jump hook.  He also is able to make shots away from the basket, from mid-range.  He is capable of putting the basketball on the floor from the wing and also making moves to the basket, where he is a good finisher.  Wood is also a very active rebounder and shotblocker - among the very best for his size and position in the class.  His length and versatility as a post are amazing attributes and will only benefit him a great deal over time as he matures and develops.  Wood will need to continue to work hard on his craft to reach his full potential as a player over time, but he has very good work ethic as a player and that should not be a problem for him at all.  Whomever lands this young man will get a nice talent who has his best years well ahead of him.