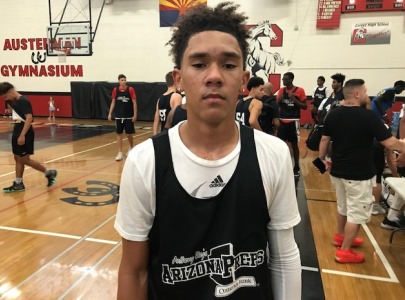 One player that took full advantage of his opportunities at this year's Southwest All-Amercian Camp was Moon Valley High School's 6-foot rising junior guard Trent Hudgens .  Hudgens has been regarded as one of the better young players in the state since entering the Arizona high school ranks, but in this year's camp he put it all together and raised his overall stock as a college prospect.

Hudgens is a nice guard prospect with a slick handle of the basketball and an ability to make plays for himself and others almost at will.  He plays with a high level of confidence and is not afraid to mix it up with any level of player.  Hudgen's performance in this year's camp was very strong and earned him a Top 20 All-Star selection as a result.

Hudgens has played at the varsity level in the state since entering Moon Valley High School as a freshman.  Hudgens instantly entered the program's starting lineup as well.  He gained valuable and serious confidence early in the process, an attribute that has benefited him nicely over time, and is now paying off.

Hudgens will look to build on his recent success with another strong performance during the month of July.  Hudgens should garner much recruiting attention this July, since many college coaches will have him on their radar.  He is a sure-fire scorer that is capable of making plays off the dribble or shooting the basketball with nice range on his shot.  He enjoys getting into the lane and finishing in traffic and over bigger defenders.

Hudgens has made a firm believer out of me that he is atleast a mid-major prospect and could be even better with continued hard work and maturity.  It will be very interesting to see where he ultimately lands over time, and this July will play a big role for him in his future recruitment.