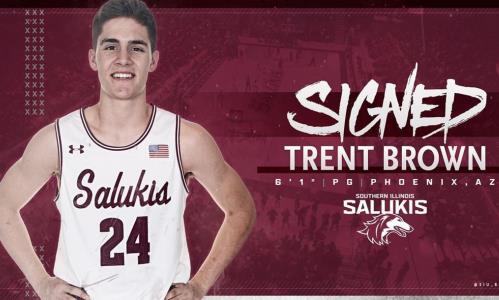 Pinnacle High School's sharp-shooting 6-foot-2 senior guard Trent Brown is coming off an excellent senior season, where he was able to help lead his program to a second-consecutive 6A State Championship.  In the process, Brown was terrific in pouring in strong numbers and some big shooting nights - his best season of his high school career.  Last week it paid off for Brown, as he decided to accept a scholarship offer from a nice college program in the Missouri Valley Conference.

After recently taking an official recruiting visit to Southern Illinois University, Brown found his fit and signed a national letter of intent late last week with the program.  Head Coach Bryan Mullins and his staff worked hard to reel in the gifted shooter prospect in Trent Brown.

Brown had decided to play through the spring before making his college decision, but in the end, Brown chose to give his commitment to Southern Illinois, rather than play on the club circuit.

Brown was among our top overall available senior prospects still available in the state.  He is coming off a terrific senior season, where teamed up with superstar guard Nico Mannion (University of Arizona signee) to create one of the best 1-2 punches in the country.  This season Brown averaged strong numbers on a very talented team - 19.1 points, 4.6 rebounds and 3 assists per/game.  Brown had high-scoring games this high school season of 40+ points multiple times, and helped lead Pinnacle to an impressive 27-3 overall record this season, amidst a strong schedule that included numerous top-rated out-of-state competition.

Arizona's 2019 class of prospects is very talented and Brown emerged early as a college prospect, after starting consistently at the varsity level as a freshman.  Brown finished his high school career as as a four-year starter for one of the elite programs in the state of Arizona, and is one of the best pure shooters of the basketball in the country.  He is a tough competitor and will compete for minutes immediately at the collegiate level.

It is an amazing finish for a fine young man, who has blossomed as a student-athlete for four years, and had a terrific high school basketball career.  Congratulations from the Arizona Preps' staff to Brown and his family, and especially to his tough and very supportive and loving father Mark Brown, who sacrificed a lot for Trent and helped a lot of Arizona kids in the process.

Arizona Hoop Review Scouting Report:  Brown is a sharp-shooting guard prospect that excels in his ability to shoot the basketball with excellent range on his shot, whilealso having a very quick release on his shot.  He is able to get his shot off quite nicely against bigger guard defenders, and also has developed a good mid-range game as well for himself.  While being an excellent shooter of the ball, Brown's natural position is as a point guard, where he is able to make players around him better.  Trent is a floor general with the basketball in his hands, and has good leadership qualities - being vocal on the floor.  He advances the basketball up the floor with the pass, and does not mind defensive pressure of opposing guards.  A very good ball handler and passer that enjoys getting teammates involved in the play.  A good on-ball defender that competes hard, and plays passing lanes.  A good rebounder for his size.  A fundamentally sound prospect with a nice overall skillset.  The son of an experienced college player/coach, Mark Brown.