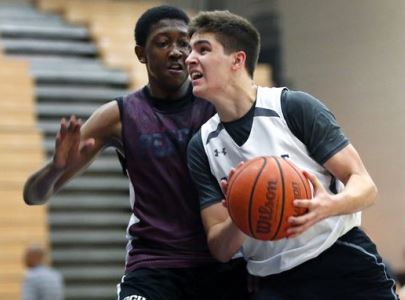 Pinnacle High School's tough and sharp-shooting 6-foot-2 unsigned senior guard prospect Trent Brown is coming off an excellent senior season, where he was able to help lead his program to a second-consecutive 6A State Championship.  Still undecided on a college program, Brown has scheduled an official recruiting visit to a college program in the Missouri Valley Conference for next weekend.

Currently, Brown has offers on the table for himself from University of Illinois-Chicago, Eastern Michigan, Northern Colorado, Northern Arizona and Houston Baptist.

Brown has decided to play through the spring before making his college decision, and next weekend (April 18 - 20), Brown has decided to take an official recruiting visit to a new program, Southern Illinois.  While it seems that Southern Illinois has not officially offered Brown yet, an offer should be looming for the sharp-shooting guard prospect.

Brown is among the top overall available senior prospects still available in the state, and he is coming off a terrific senior season, where teamed up with superstar guard Nico Mannion (University of Arizona signee) to create one of the best 1-2 punches in the country.

Arizona's 2019 class of prospects is very talented and Brown emerged early as a college prospect, after starting consistently at the varsity level as a freshman.  Brown finished his high school career as as a four-year starter for one of the elite programs in the state of Arizona, and is one of the best pure shooters of the basketball in the country.  He is a tough competitor and will make a college program proud, as he is also a stellar student as well.

I will be keeping a close eye on Brown's college recruitment this spring, and will bring you recruiting updates on him as they continue to develop.

Arizona Hoop Review Scouting Report:  Brown is a sharp-shooting guard prospect that excels in his ability to shoot the basketball with excellent range on his shot, whilealso having a very quick release on his shot.  He is able to get his shot off quite nicely against bigger guard defenders, and also has developed a good mid-range game as well for himself.  While being an excellent shooter of the ball, Brown's natural position is as a point guard, where he is able to make players around him better.  Trent is a floor general with the basketball in his hands, and has good leadership qualities - being vocal on the floor.  He advances the basketball up the floor with the pass, and does not mind defensive pressure of opposing guards.  A very good ball handler and passer that enjoys getting teammates involved in the play.  A good on-ball defender that competes hard, and plays passing lanes.  A good rebounder for his size.  A fundamentally sound prospect with a nice overall skillset.  The son of an experienced college player/coach, Mark Brown.