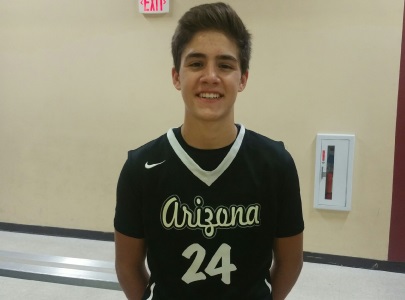 Arizona's 2019 class of prospects is absolutely loaded with talent for college coaches to take a hard look at, and, as a result, many college coaches are already beginning to position themselves with many of the prospects in the class.  One of the top prospects in Arizona's 2019 class is Pinnacle High School's sharp-shooting 6-foot sophomore point guard Trent Brown.  This week, Brown received two different scholarship offers for himself.

After a strong performance this spring on the club circuit with his club team, Arizona Power 16U Black, Brown would receive scholarship offers very early in the process from the University of Illinois-Chicago and also Northern Colorado - his first two scholarship offers in the recruiting process.

Brown emerged early as a college prospect, after starting consistently at the varsity level as a freshman.  After leading the attack for a talented team that would advance to the late stages of the Division-I state playoffs as a freshman, Brown would average 11.4 points and 3.4 assists per/game as a sophomore - teaming up with star freshman guard Nico Mannion.

Brown is set to have a stellar high school basketball careeer, as he will be a four-year starter for one of the elite programs in the state of Arizona.  This club season though, he has really picked up his game and has become a nice recruiting target for low to mid-major college programs to take a hard look at.

I will be keeping a close eye on Brown this club season and over the next two years, and bringing you any recruiting updates on him as they continue to develop.

Arizona Hoop Review Scouting Report:  Brown is a sharp-shooting guard prospect that excels in his ability to shoot the basketball with excellent range on his shot, while also being able to make players around him better.  Trent is a floor general with the basketball in his hands and enjoys playing on the big stage.  He is a leader with the basketball and is vocal on the floor - something not seen often by young men his age.  He advances the basketball up the floor with the pass, and does not mind defensive pressure of opposing guards.  A very good ball handler and passer that enjoys getting teammates involved in the play.  A good defender.  A tough customer as well, Brown is a budding young prospect with excellent potential for the future.  He is the son of an experienced college player/coach, Mark Brown.