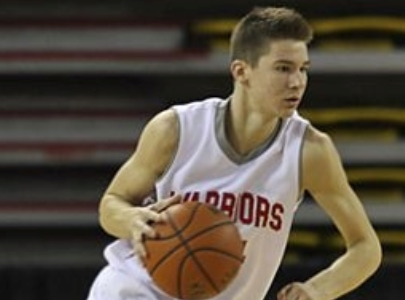 The Arizona spring club basketball season kicked off about a month ago.  On the West Coast, there have been many stories and top players that have already emerged.  Those players have began to receive top interest from schools all around the country.  In Arizona, no story though has been bigger than that of Dane Kuiper.

Kuiper is a transfer from outside the state of Arizona - coming from Wasilla, Alaska.  Kuiper moved to Arizona recently and now attends Corona Del Sol High School in Tempe.  A member of the 2015 class, Kuiper is a 6-foot-6, 190-pound wing prospect who I feel is one of the top young talents on the West Coast that I have seen this spring season.  Kuiper can score at all three levels - at and around the basket, from mid range and he has a consistent, quick release 3-point shot, which can extend out past the college 3-point line if need be.  He is also a very good offensive and defensive rebounder and finds open teammates in transition or in an offensive set to score easy points.

The thing that stands out most to me about Kuiper is his athleticism.  He finishes extremely well around the rim and has a quick bounce off the floor in traffic, or alone on the fast break, which reminds me very much of Chase Budinger (former University of Arizona All-American and current NBA Minnesota Timberwolves player).  Kuiper is currently playing with one of the top teams in Arizona, Arizona Power U16's.

The U16 Power team features some of the top talent in the state of Arizona in Chaparral's Brandon Hoffer and Kenzo Nudo, Cienega's Terrence Johnson and middle-schooler Markus Howard.

Dane has recently chosen to enroll at Arizona basketball power Corona Del Sol HS, where he will team up with top 2014 prospects Casey Benson and Connor Macdougall (Arizona State commit).

With the addition of Kuiper, I feel that Corona has a very strong chance to 3-peat as 5A State Basketball Champions and will have a very strong season next year with minimal losses.

Arizona Preps will keep you up-to-date on Kuiper’s summer and recruiting.  We are very happy that the state of Arizona has scored such a talented, young player.