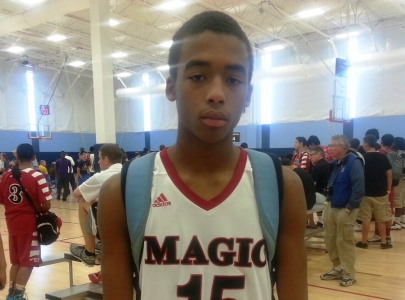 One of the top overall prospects in Arizona's 2017 class before he decided to move back to the state of New Jersey was 6-foot-1 sophomore guard Jaiyer Jinwright.  Jinwright spent his freshman season  in Arizona but decided to move back to West Orange, New Jersey for his sophomore season where he played at Newark East Side High School (NJ).  Now Jinwright is considering making a move back to the state of Arizona, where he could land at a state high school basketball power.

Jinwright moved to Arizona during the summer of 2013, and then decided to attend Queen Creek High School.  But at the end to the high school season, Jinwright moved back to New Jersey for his sophomore season.  He is now considering moving back to the state of Arizona, where his father, Joey Jinwright, lives and works.

Jinwright's father advised us that he is still unsure as to when his family will make their decision for Jaiyer's future school, but the decision should come very soon so Jaiyer can prepare for next high school season.  Currently, Jaiyer has shared his time with two different club teams - locally, the Arizona Magic club program, and in Jersey, a strong club program kown as The Firm, organized by NBA guard Kyle Anderson (San Antonio Spurs).  This spring, Jinwright helped lead his AZ Magic 16U team to a tournament championship at the Pangos Sweet 16.

Whichever school Jinwright lands at, he has a very bright future ahead of him, as he is a very slick guard with the ball in his hands - possessing excellent quickness and a handle that allows him to get anywhere he wants to on the floor.  He is an excellent finisher with very good body control and a knack for getting into the lane and finishing plays.  He is a floor general pont guard with an exclelent feel for the game and makes players around him better.  A very nice looking guard prospect for the 2017 class.

While Jinwright is already receiving a lot of college attention already as a youngster on the East Coast, his father is entertaining the idea of having him move back to the state of Arizona to live with him and also to increase his recruitment in the West.

It will be very interesting to see where Jinwright lands, but wherever he lands, I look forward to watching him develop into a serious division-I prospect.

Arizona Hoop Review Scouting Report:  Jinwright is a "city" guard and is still considering Arizona and New Jersey for high school.  A very slick and skilled guard prospect that is a floor general that makes players around him better.  Has an excellent handle of the basketball which allows him to get anywhere on the floor, and also get into the lane and make plays.  Has a nice knack for scoring the basketball off the dribble, and is a very good finisher in the lane over bigger defenders.  A good scorer.  Has a nice shooting stroke, and is at his best with the basketball in his hands where he is able to make plays for himself, while creating for his teammates.  An excellent passer that sees the floor and pushes the basketball.  A very good defender with excellent quickness and quick hands and feet.  Plays passing lanes.  A nice, true point guard prospect for the future.