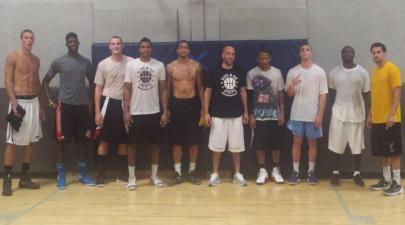 Scottsdale-based basketball trainer Padraig O'Brien (OB) has worked very hard to raise the level of basketball training in the state of Arizona.  In an effort to do so, O'Brien created the Give N Go Hoops basketball facility in North Scottsdale three years ago.  OB brings 20 years of experience to Give N Go Hoops and started working with 7th and 8th graders in 1993.  Since then he has worked with thousands of high school, college, and professional players (including 5 NBA lottery picks).

Very well respected in the business, O'Brien has earned the respect of coaches and players across the country for his ability to make players better.

The Give N Go Hoops facility is Scottsdale’s first indoor basketball training facility, and has become the place of choice for top basketball talent - high school, college or professional to improve their performance.

This week continued to prove that case for O'Brien, as he worked out many of the state's top basketball products, and also some top-rated college players from abroad at the workout facility.  Such top-rated local products as Matt Carlino (BYU), Lawrence Westbrook (University of Minnesota/professional player), Sai Tummala (University of Michigan/Salt Lake Community College), Kyle Tresnak (Weber State), Collin Woods (UC-Irvine), Luke Roh (Colgate University) and Carter Warnock (Point Loma via Eastern Washington), just to name a few, have all worked out together with O'Brien this week.

Also attending these workouts and providing serious competition for the group has been several top-rated college prospects - future NBA draft pick, 7-foot-1 post Alec Brown (University of Wisconsin-Green Bay), 6-foot-8 post Brandon Davies (BYU) and 6-foot-10 post prospect Anthony Stover (UCLA).  Brown is a budding talent from O'Brien's hometown of Winona, Minnesota, and is a coveted post prospect by many NBA scouts.  Davies was in the national news two seasons ago after being suspended by BYU's coaching staff late in the season.  Davies is currently an NBA prospect for Brigham Young.  Stover is a highly-sought after post prospect after failing to qualify during the second semester at UCLA in the spring.  Stover was a key contributor on this past season's UCLA team and is a future NBA prospect.

O'Brien and his Give N Go Hoops staff do an excellent job of developing basketball talent and providing training and drills that are applicable to the game.  O'Brien's level of intensity and coaching style are exemplary of coaches from year's past.

Notes:  Give N Go Hoops is hosting their 3-on-3 League for Junior varsity and varsity basketball players.  Up to 4 players per team/$225 per team.  All games played on Saturdays (middle school will play on Fridays), 6 games plus playoffs.  STARTS August 11th (August 10th for middle school). Games start at 10am sharp!! All are welcomed!