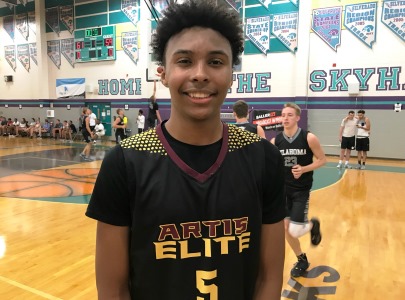 Artis is a nice talent that has overcome several injuries throughout his high school career, and returned to have a very good overall high school career.  If not injured, this young man would have ben regarded as one of the top overall prospects in the class.  A skilled wing prospect with a nice overall skillset.  Has a good perimeter shooting stroke with range, and is able to make plays for himself and others off the dribble, where he is a good finisher in the lane against bigeer defenders.  Good in the open floor, and a good slasher.  An active rebounder with good size for the wing position.  A good passer that sees the floor and is willing to make plays for others.  A good sleeper prospect with a bright future ahead.  Has a great smile and attitudfe, on and off the court.  Son of former Arizona star and Mesquite HS head coach Carlos Artis.

Wilson is a good combo-guard prospect.  He has excellent athleticism and a nice motor that allows him to make plays for himself and others.  A good shooter with range on his shot, and an effective scorer that can create and finish off the dribble.  Excellent in transition.  A very good on-the-ball defender that is capable of becoming a lock-down defender.  Needs to become a point guard over time to maximize his college recruitment, since he is at his best as a scorer.  A sleeper prospect.

Low-post player with good size and length of body.  Not overly athletic but knows how to use his length and physical size to make things happen on the floor.  Runs the floor hard and is a solid finisher, although better physical strength would be very beneficial.  Good low-post defender and shotblocker.  An active rebounder.  Still needs time to develop.

Baker is the younger brother of former Tempe HS star guard and Pepperdine/San Jose State player Jordan Baker.  Like his older brother, Josh has a knack for making shots and shooting the basketball with consistency and while being defended by opposing guards, able to make plays for himself and others off the dribble, although he enjoys scoring the basketball at a high rate.  A high-scoring guard prospect that is also able to make plays on his own with an advanced offensive skillset that allows him to score from anywhere on the floor, and also get to the basket and finish plays with a smooth approach to the game.  Over time, like many others, he will need to add physical size and strength to his thin frame to maximize his potential as a player for the collegiate level.  He will be a combo-guard prospect at the next level that will be able to play as both guard positions over time.

Strover is a skilled guard prospect with a slick handle and an ability to slash and finish.  He is very good in the open floor, and is a good finisher.  Strover is very thin physically, but has a very athletic frame with nice upside.  A solid shooter that needs to become more consistent from longer ranges.  A solid passer.  Good ball handler – capable of playing both guard positions.  A   very good defender that is capable of becoming a lock-down defender over time.  Has very good potential as a player.

Burries is a high-scoring, lightning quick guard prospect with a superb handle of the basketball and a nice left-handed shooting stroke.  He has a very quick release on his shot and is able to make shots from anywhere on the floor.  Burries scored 68 points as a freshman in a game, and is among the best scorers of the basketball in the West, especially for his size.  Of Native-American descent (Apache), Burries is a nice guard prospect with an advanced offensive skillset.  While still very small in size and stature, Burries will need to add serious physical size to compete with bigger guards over time.  A very good ball handler and passer that sees the floor.  Excellent finisher.  A very good defender.  Has quick hands and feet.  The all-time leading scorer in Arizona basketball history!

Rashaan is a solid senior guard prospect that is a very good athlete at the guard position who also has the ability to make plays for himself and his teammates. Has the ability to finish at the rim, knock down a floater or mid-range pull up and is a capable three point shooter as well. He is also a very scrappy defender who gives other guards problems. He showed the ability to make others better as well, and get them open looks off of his play making ability. He is a very intriguing prospect that will only get better.

Jones is a high-scoring guard prospect with a nice motor and athleticism.  The son of former University of Indiana standout Jay Edwards, Jones is a sure-fire top-prospect for the future.  A good ball handler and passer, but is at his best when scoring the basketball.  A combo-guard prospect.  Has very good lateral quickness, and could become a lock-down defender over time.  Pushes the basketball up the floor.  A good finisher in traffic.  Creates his own shot and also sees the floor.  A good sleeper guard prospect.

Allen is a long, thin and rangy wing prospect that is able to play several positions on the floor.  His length is very intriguing as he looks as if we will continue to grow a great deal over time.  Unlike his twin brother, Jalen is not as far along physically and in his skillset, but he is still very good.  Jalen is a good mid-range shooter and scorer, but still needs to add consistency from longer ranges.  Fundamentally sound.  Able to score inside and out.  As he adds more size to his thin physical frame, then we will see his game progress really nicely.  A nice looking prospect that has a twin.  Father played professionally.

Simon is a good ball handler and passer of the ball, and is capable of playing both guard positions on the floor.  A good shooter of the basketball with some range on his shot.  Needs to be more consistent from longer ranges to maximize his potential as a player.  Has a good mid-range game, and ability to make plays off the dribble for himself and others.  A versatile guard prospect.  A good ball handler.  A good passer that sees the floor.  A solid on-the-ball defender with solid lateral quickness.  Needs to get physically stronger and more explosive to reach his full potential as a player.  A solid overall prospect that could make a significant jump in our rankings with continued hard work and development.

Barnes is a very skilled and crafty point guard prospect with an excellent handle of the basketball and an ability to make plays for himself or others off the dribble.  He can get into the lane quite easily and then set up a teammate with a pass, or look to finish himself.  Needs to add physical size to his frame to maximize his potential, but he has time.  Excellent quickness.  A good shooter with range.  Has an excellent feel.

This guard prospect is a lesser known prospect by basketball enthusiasts in the state, but he is among the better guard prospects in the class.  A skilled point guard prospect that creates for others and has the ability to make plays off the dribble.  He is also a very good shooter with range on his shot, and is a good finisher in the painted area of the floor.  A good ball handler and passer that sees the floor.  A good defender with excellent toughness.  Has good potential to develop into a serious college prospect after a stint in the junior college ranks, or could play at a smaller four-year college now.  Had an excellent senior season and is a very underrated guard prospect.  A very good sleeper prospect that knows how to play the game.