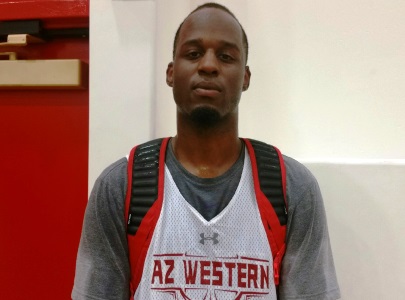 Easaw is a combo-guard prospect that has good size for the point guard position, a position he enjoys playing, since he likes to have the basketball in his hands.  He is also capable of playing the off-guard position as well, but it as his best as a point guard.  A very good ball handler and passer that sees the floor.  Pushes the ball up the floor.  A good finisher in traffic.  A solid shooter with some range on his shot, but is at his best from mid-range.  A good on-the-ball defender.  A solid guard prospect.

Allen is a skilled low post prospect that has made his travels around the country in the last two years.  A 2015 high school graduate, Allen found himself first traveling to another country before deciding on a college program last season.  He has developed physically a great deal since high school and plays strong now in the interior.  He also runs the floor and is a good finisher in transition.  Allen saw very little playing time this season, which makes it difficult to evaluate him at this point.

Dubot is a long and tall, but very thin post player with good lift off the floor and an ability to finish strong at the rim.  A good finisher that will only improve a great deal over time as he adds some size to his thin physique.  Has solid low post moves and can score inside the paint, as needed.  Does most of his work on the glass and blocking/changing shots in the interior.  Runs the floor.  Solid low post prospect.

Orr is a tall, lean low post player that is able to play inside and out.  He has good size for the low post position and is able to score inside and out, with a nice perimeter shooting stroke which allows him to score from the wing on the floor.  He has a soft touch.  An active rebounder and a capable shotblocker.  Runs the floor and is mobile.  Solid prospect.

Megwa is a nice talent that should have battled this season for the honor as the conference's top point guard prospect, but instead struggled at times.  An excellent ball handler that is able to get to anywhere he wants to on the floor, and is a very good finisher in traffic, where he uses excellent body control to finish plays at the rim.  A good shooter but lacks range on his shot.  Takes good shots in the offensive set. A very good passer that is a floor general for his team.  A one-man press breaker.  A very good on-the-ball defender that is capable of becoming a lock-down defender at the next level.  Very good in transition.  A sleeper guard prospect.

Nelson is the conference's best pure shooter of the basketball.  Possessing a very pure shooting stroke with unlimited range on his shot, Nelson can make shots from anywhere on the floor and at a very consistent rate.  A sure-fire shooting specialist for any team needing help in that department.  A good ball handler and passer.  Fundamentally sound.

Matthews is a floor general point man that made the Phoenix College offense go this junior college season.  He is a very good ball handler and passer that likes to push the basketball up the floor and make plays for hismelf and others.  Gets into the lane and is a good finisher for his size.  A good shooter with range.  An excellent on the ball defender.  Solid guard prospect that lacks size but makes up for it with intensity of play.

Johnson is a quality point guard prospect with a nice overall feel for the game and an ability to score the basketball.  A left hander.  Has an excellent handle of the basketball and can get anywhere he wants to on the floor.  A native of Ankorage, Alaska.  Pushes the ball up the floor and is good in the open court.  A very good on-the-ball defender.  A good point guard prospect.

Reid is a wide body low post player with very good size - weighing 245-pounds.  A native of Jamaica Queens, NY, Reid is a bit of a tweener, but he does what he does best - rebound.  A good finisher inside the paint that also gets to the free throw line quite often.  Does not mind physical contact.  Runs the floor.  Good low-post defender.  Solid low post prospect for a smaller college program.

Nelms is a skilled wing prospect that is capable of playing both forward positions on the floor.  He likes to play the perimeter much more often than he does on the low block, which makes this young man a versatile performer.  Has a good shooting stroke with range and also a solid overall mid-range game, which is his best asset - allowing him to score inside and out.  A good rebounder.  A good low-post defender and capable of guarding quicker players on the wing.  A solid ball handler.  Solid prospect overall.

Moore is a superior athlete that plays well above the rim and is very good in the open floor.  A high energy and electric wing prospect, Moore can score in bunches and loves to play in the open floor or slash to the basket in a half-court set.  Still needs a lot of work on his perimeter skills and jump shot to become more consistent from beyond the arc.  Needs to polish up his overall fundamentals for the game to become more of an offensive threat.  Currently, he is a sure-fire athlete.  He is an excellent defender and shotblocker with very good lateral quickness defensively.  A potential lock-down defender at the next level.  OK ball handler and passer.