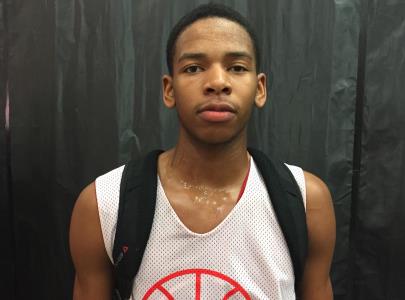 James has really developed nicely since leaving the high school ranks, as he has added some size and has a much better overall motor now, which allows him to make plays at a high rate.  James is an attractive looking prospect, as a result of his nice size and skill level.  This young man has excellent potential for the future, as he continues to mature physically and mentally.  He is just beginning to realize how good he can become.  Still very young, James is a talented and skilled 3/4 prospect that has very good size and a nice overall skill level.  He needs to embrace the four position much more in his play rather than fade to the wing.  As he continues to play stronger in the low post, he will open up his overall game as a player.  Plays similar to that of a young Boris Diaw (NBA - Utah Jazz), as he is a big forward prospect that loves to pass the basketball to the open man on the floor.  Will be the best passing forward in the conference this junior college season.

A native of Milwaukee, WI, Polk-Hilliard is a very nice atheltic talent with loads of potential.  He has superior athleticism and bounce off the floor, combined with a nice motor on both ends of the court.  His size suggests that he should be a perimeter player, but he is able to play both forward positions on the floor and should this junior college season.  He is a nice talent that deserves loads of recruiting attention this spring from many mid-major division-I programs.  While waiting until the late spring signing period, this young man could receive much higher college recruitment.  A nice looking prospect.

Simmons is a gifted wing prospect with good physical size as a wing player, and is among the top returning players in the conference from a year ago.  A skilled wing player, Simmons has developed hsi ability to shoot the basketball with range, and has a nice overall repetoire of skills that allows him to make plays for himself and others.  He also has a good mid-range game for himself - his best attribute as a player.  An active rebounder.  Solid defender.  Good overall athlete.  Has some upside.  A solid prospect for a mid-major division-I program or higher.  Had a strong sophomore season for CAC, and ranked among the top overall producers in the conference this season.

Webb is a very good shooter of the basketball with unlimited range on his shot, which allows him to play both guard positions on the floor.  A combo guard, Webb has an excellent body and knows how to play the game.  He has a good overall feel for the game.  A good ball handler and passer.  A good on the ball defender.  Had a very good season for AWC and provided excellent depth in the backcourt.

A native of Geneva, Switzerland.  An athletic 4-man prospect that is able to play inside and out.  Anabir has a very athletic frame and a great looking body for the next level.  He is a good low post scorer and finisher around the basket.  An active rebounder that needs more energy on both ends of the floor to maximize his potential as a college prospect.  Runs the floor hard.  A solid shooter from mid-range and a capable three-point shooter.  Good low post defender.  A solid low post prospect that could play at the mid-major level.

Okulue is a big post player with a nice body with good length and a strong physical frame.  He is still very much a project as a player, since he is very raw offensively and is still learning the game.  He runs the floor hard and competes on both ends of the floor, but he is not a scorer by any means.  At this point in his young career, he is a rebounder and low post defender and could provide immediate depth in the interior for a smaller division-I college program, but he will get good interest from many college programs, as a resut of his size and work ethic.

Jackson is a four-man prospect that is very thin physically but is active.  A good scorer around the basket that is very crafty and shoots a high percentage from the field.  Scores well in transition.  Good finisher.  An active rebounder.  Good defender.  Runs the floor.

Acedo is a big-time shooter of the basketball with unlimited range on his shot – able to catch and shoot the basketball with superior range and quickness on his release.  He has very good size for a shooter at 6-4 in height and is also a little older so he is a mature prospect.  The best pure shooter in the conference.  A good scorer in transition – plays well in the open floor where he likes to spray to the wing for three-pointers.  A good finisher.  Good ball handler and passer.

Love is a left-handed shooting guard prospect with a nice shooting stroke with range.  He is a crafty guard prospect that also likes to use a variety of floaters in the lane.  Love has good size as a guard and is a native of Seattle, Washington.  A good ball handler and passer.  A good defender with good overall athleticism.

Jones is a skilled left-handed performer with a nice motor and an ability to score as a slasher and in the open floor.  He is capable of scoring either from the wing or off the dribble at and around the basket.  A capable three-point shooter.  An active rebounder.  A good on the ball defender that also plays passing lanes.  A good finisher.  A good ball handler.  OK passer.